back to blog
March 18, 2014
Which App Stores Should You Use?
byMark WilcoxinTools

Publishing your app in a store can involve significant effort. Depending on your goals some app stores can be more attractive than others. If you’re looking to earn direct revenue from your apps, which are the best stores to target? What follows is some general advice backed up by data from our latest survey. 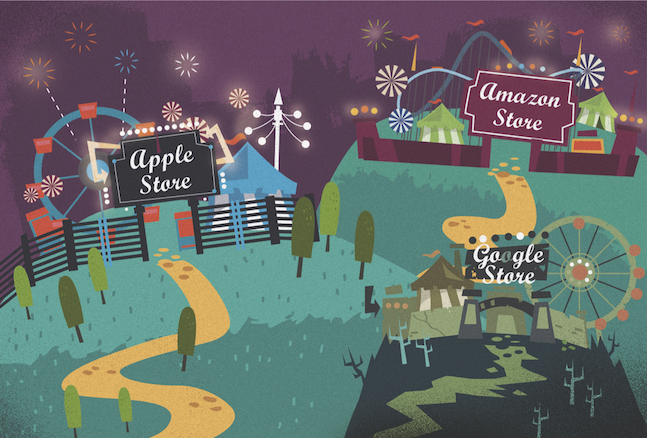 To publish, or not to publish?

If you only want to build an app as a hobby, first consider whether you need to publish it on a store at all, or whether you can just share it privately with interested parties. There are more than enough apps already in the stores and the poor developers trying to make a living from their apps have to contend with a lot of noise in the very basic search results as it is. If reaching an audience is an important part of your hobby creation then building an Android app and publishing on Google Play is the obvious option. It’s low cost, there are few rules and there’s a very large user base.

Apple is where the money is

If you’re building an app to generate revenue directly then an iOS app on Apple’s App Store is still the best option initially unless you’re only targeting countries where the platform has very low market share. Even with an ad-supported revenue model, the larger user base on Android is usually more than compensated for by better engagement and higher rates on iOS. When aiming for reach then the most important thing is to match the target demographics with those of the platforms. In most cases you’ll want to target both iOS and Android.

These are the common cases and this is fairly common knowledge. As such you can see it reflected in the overall popularity of the various stores below.

If you already have an app published on one or more stores, the decision to add it to another is not always an easy one. Even if you don’t need to port your app to a new platform to access a new marketplace, you still need to learn about the publishing process, create (and usually pay for) an account, publish the app and future updates and monitor reviews and visibility within the store. If the audience using the new store won’t be reached by your existing marketing efforts you may have to expand those as well.

Looking at the average revenues of developers based on how many stores they publish on, it’s tempting to think that publishing to as many stores as possible (and thus using a cross-platform development tool) is the way to go.

However, this is getting causation backwards. There is an improvement in revenues for almost anyone adding more potential customers but looking at the median rather than mean we can see this is unlikely to cover the cost of managing the app across several extra stores. What we can really see here is successful apps tend to port to more platforms and so [tweetable]it’s apps that already have high revenues that then publish in additional stores[/tweetable]. There is also a [tweetable]higher than average proportion of developers working on a contract basis who publish to five or more stores[/tweetable], which pushes the median revenue up.

The same phenomenon causes the average revenue of all developers who publish in a particular store to be very misleading. Developers publishing in the smaller stores often already have successful versions of the apps on the leading platforms, or are simply contracted to port those apps. If we split developers by the number of stores they publish on and look at revenues by platform then the differences become clear.

Where to publish next?

Looking at developers who only publish on a single store, [tweetable]Apple’s App Store is far ahead of every other store except the Amazon Appstore[/tweetable]. However, the number of developers who only publish to Amazon’s store is extremely small (only 16 in this sample) so this figure is not reliable. That said, [tweetable]developers who publish in Amazon’s store and one other are far more numerous and have high average revenues[/tweetable], plus data from Distimo suggests that some Android developers are seeing significantly better revenues from Amazon than from Google Play.

If we consider those publishing to two stores then Apple leads with Google in a clear second place, while Amazon still shows relatively good revenues. The other interesting data here is “where do BlackBerry developers go” – those publishing to BlackBerry World are much more likely to have Google Play or the Windows Phone Store as their second store than others. Only 11% of developers publishing to BlackBerry World and one other store also publish to the Apple App Store. That’s somewhat surprising given BlackBerry’s previous dominance of the enterprise market and that iOS is now taking over in that space.

When developers publish to four or more stores we see a significant jump in revenues for those publishing to the Windows Phone Store. Since the revenues for those who only publish to that store are so low, it seems unlikely that it’s revenues from Windows Phone itself creating the difference. More likely is that Microsoft and Nokia have been providing incentives for the most successful apps to port to their platform. Microsoft’s Windows Phone platform is strongly differentiated from the others. Developers have to design a new UI and generally build it with different technology in order to target the platform. The associated costs are much higher than adding another Android or web-based platform’s store. As such, at similar scale to many alternatives, Windows Phone is unlikely to produce a good return on investment unless Microsoft provides a strong financial incentive.

For developers not looking for direct revenues, an Android app on Google Play is probably the obvious first choice. For those who are looking to monetize their apps directly, Apple’s iOS App Store is the clear leader, with Google Play as the first place to expand after that. BlackBerry World appears to be very unattractive versus the other options from a revenue perspective. Beyond that, the Windows Phone Store seems to be more popular than it deserves (although this might be due to ports paid for by the platform owner) whilst the Amazon Appstore seems unfairly unloved. Some developers have had issues with Amazon’s developer agreement and pricing policy but the results of those using Amazon’s store suggest it’s worth another look.