back to blog
April 05, 2013
Voice on the verge of break-through? Going beyond telephony with Voice Application Platforms
byStijn SchuermansinTools

Voice communication is one of the core functionalities of every mobile phone. However, telephony is up for a big shake-up, as Internet telephony companies like Skype and voice application platforms like the ones below are challenging century-old assumptions about how people speak with each other remotely. (You can read all about this trend on the VisionMobile blog: here and here.)

Voice platforms cater to many use cases

Voice APIs allow developers to integrate voice functionality within their apps, bypassing the telco services that traditionally provided these capabilities. Developers use Voice services to enable a number of use cases such as voice calls, conference calls, video calls, voice transcription, IVR services etc. Telcos such as AT&T and Verizon are reacting to this trend (for over-the-top services) by opening up access to their services via APIs.

While Voice services cater to a number of different use cases, their use is relatively low among developers because, contrary to other tools in the Developer Economics 2013 survey, they are specialised tools that provide functionality within an app rather than support for the app or the business (as, for example, user analytics or ad services). 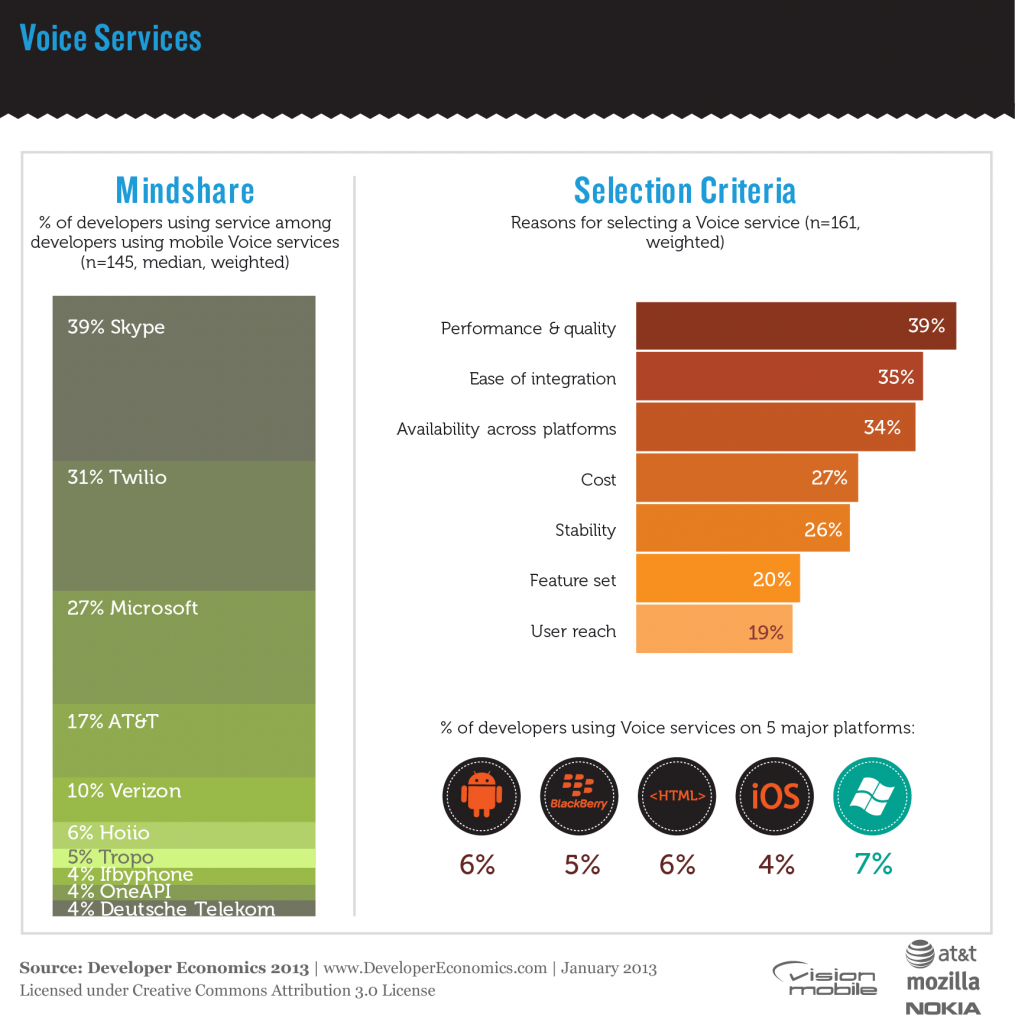 Skype leads in developer mindshare when it comes to voice services, used by 39% of developers that integrate Voice services within their apps. However, Skype does not provide services through an API but rather through URIs that redirect the user to the Skype client which must be installed on the user’s device. Developers using Skype use it primarily for conference calling (55% of developers utilising Skype), Video calls (43%) and Outbound calls (37%).

Most developers (39% of those using voice services) highlighted performance and quality as a top selection criterion for Voice services. Voice quality is not guaranteed on mobile data networks but is critical in most use cases where voice services are used, particularly in real-time voice such as conference calling. While network quality is often out of the direct control of voice services providers, there is still a lot that can be done on the service providers’ side such as optimising encoding algorithms and scaling the architecture of their voice infrastructure. Ease of integration and availability across platforms, the prevailing selection criteria among all third-party tools and services are also important when selecting a Voice services, as highlighted by 35% and 34% of developers using Voice services, followed by cost (27%).

Which voice services are other developers using?