back to blog
December 19, 2012
The changing landscape of app discovery
byAndreas PappasinBusiness

[The explosive growth of app ecosystems is creating serious bottlenecks in app discovery that only popular apps can overcome. Having 700,000 apps is great for platform vendors, but not so great for developers, whose apps are lost in the heap. Andreas Pappas takes a look at the app discovery problem and considers whether social discovery is a better solution than the alternatives available today. This post also appeared on the VisionMobile blog. Follow Andreas on Twitter: @pappasandreas] 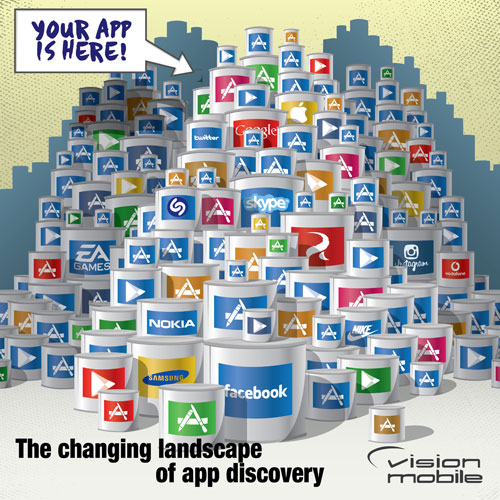 One of the greatest marketing challenges facing developers is being discovered, i.e. breaking through app store congestion and in front of user eyeballs. With Google Play and App Store now reporting over 700 thousand listed apps, browsing through these is ineffective, if at all possible. In fact, large app stores and the entire mobile application space are increasingly resembling the web when it comes to discovering content: it’s a jungle out there.

App discovery is a challenge

As always, when there’s a problem, there is an opportunity: app-store independent discovery platforms are vying to solve the discovery problem, providing a variety of discovery methods (e.g. daily deals, cross-promotion) for both publishers and users. These platforms often have to compete with or challenge native app-store mechanisms and policies as in the case of incentivised downloads.

The app-store is a storefront: it’s designed for users, not developers

Developers have been criticising app stores for lack of innovation in app-discovery. Apple’s redesigned app store has attracted mixed feedback. Some publishers have been complaining about the removal of lists that previously allowed quick browsing through apps. The way apps are presented among search results in the most recent version of the App Store only shows one app per page, casting most apps into obscurity.

However, developers should keep in mind that app store curation and whatever ranking methodology and the presentation format this entails is not designed with publishers in mind. It is designed to help users discover and acquire apps, not publishers to be discovered. As Chris DeVore points out:
“blaming the app stores for poor discoverability is a little like blaming Google for not putting your site on the first page of results — getting found is the responsibility of the publisher, and is as much a part of the entrepreneurial game as building a great product”.

This doesn’t imply that app stores should not cater to developers’ needs since they are the cornerstone of app ecosystems. However, if there is a tradeoff to be made on the user vs. publisher prioritisation, it will invariably be in favour of the user. The scarce visual bandwidth afforded by a small screen acting as a gateway to millions of apps is extremely precious for Apple and Google: it is a storefront that vendors will use to demonstrate the ecosystem’s value to their users. Compromising the value of this storefront to users comes with the risk of losing control of the gatekeeper function. This is why Apple in particular has been repeatedly cracking down on incentivised download schemes such as TapJoy although this cat and mouse game is still going on and even large publishers rely on it as a revenue source.

Third-party services to developers’ rescue but at what cost?

App store optimisation (ASO) aims to improve app visibility within app stores, building on the foundations of search engine optimisation. For the most part, ASO focuses on improving app curation by including relevant keywords and content that will be picked up by app store search algorithms or hand-picked by staff. There is however, another side to ASO, focusing on algorithmic optimisation, essentially boosting app downloads to a level that will place an app among the most popular in a category so that it appears in the top app store listings for the category. Bot-assisted download services are known to be used for this purpose.

While some of the options mentioned are free, others come at a significant cost. For example, promoting an app via a deals site (e.g. free-app-a-day or FAAD) may set you back a few thousand dollars (up to $10,000 has been reported), the exact amount depending on what your targets are. While this could potentially generate a few 100k downloads, the ROI depends on your revenue model and conversion rate, i.e. on the ability to retain and monetise the user influx.

For most developers, particularly those new to the app economy, there is a steep learning curve to climb when marketing apps, quite steeper than getting to grips with a new development environment. When it comes to marketing, one size doesn’t fit all and quite often a fair amount of trial and error will be necessary. When designing a marketing strategy the first step should be to set targets and KPIs that are in line with the business objectives and revenue model used: a few 10k downloads will not take you far when advertising is your sole revenue source.

An important metric to keep track of is the cost-per-install (CPI), i.e. how much it costs to acquire a user. However, this metric must be adapted to the specific revenue model for each app: not all installs will have the same impact on the bottom line. In other words, some users are more valuable than others. If loyal users are the target, then cost-per-loyal user is what you should be tracking.

Before selecting a promotion channel developers should research alternatives. On several occasions, simple, free strategies may work quite well: dropping the price of your app or making it free for a period of time is likely to be picked up by a number of sites that will then showcase your app for free. This could potentially drive downloads at a much lower or even zero CPI compared to daily-deal services. A PR campaign that targets the right media channels can also have similar effects.

The user problem: Is the app store a sustainable discovery medium?

It is becoming increasingly evident that app stores offer extremely limited bandwidth when it comes to app discovery. There is so much they can show and as the number of apps grows, competition for screen-space will become even tougher in the future. From a user perspective the present app store-based discovery model is showing signs of weakness and its long-term utility is questionable.

To some extent this is a result of popularity-based rankings. While popularity-based discovery works quite well for mainstream apps, app ecosystems have matured to a level where the long-tail has become an equally important element of the ecosystem. Users often seek apps for very specific use-cases and a niche interest. Discovering these apps using popularity-based criteria is bound to fail. On the contrary, social media work really well for addressing discovery issues associated with the long tail. Hubbl, Crosswalk, AppFlow and AppGrooves are startups aiming to bring a social element to app discovery, while Twitter and Facebook are also well placed to leverage their scale in this area, as demonstrated by Facebook App Center.

Personalised mobile app store fronts powered by the social graph can potentially provide a much better discovery experience for end-users. This is the natural step forward for Apple following the acquisition of Chomp and the Facebook integration on iOS6. Presently, the only personalisation currently provided by Genius, are recommendations based on similar apps to those you have downloaded. Google Play has also introduced basic personalised & social discovery capabilities mainly filtered by user location and choices of people who have downloaded similar apps or that belong to your Google+ circles. Amazon, having a strong background in recommendation engineering can potentially provide a much more fulfilling discovery experience, however, a scroll through the “recommended for you” category on the Amazon app store was disappointing.

It is evident that major app store vendors are taking note of the discovery issues for end-users and are taking steps to provide a better user experience by integrating social and personalised elements in discovery. However, a meaningful discovery experience can only be provided if one has access to the right data such as your location, interests, groups and friends for example: there is still some way to go before Google Play will be able to recommend the right travel app for your planned trip to Bolivia or an app that will help you monitor a medical condition. Partnerships, based on social and consumer data, will be key in providing a fine level of personalisation but for app store vendors this may come at the cost of relinquishing some control over the discovery experience on the platform.

For developers, a departure from the present popularity-based model to a social-based model will create better opportunities to target campaigns more effectively and acquire more loyal users. Social discovery is much a better option for aligning developer incentives with user incentives when it comes to app discovery.