In our latest developer survey we asked developers about the different screens they target. The results show smartphones are the most popular target, whilst tablets are catching up fast. PCs are most commonly targeted by web developers while TVs are still a niche app market for all developers. 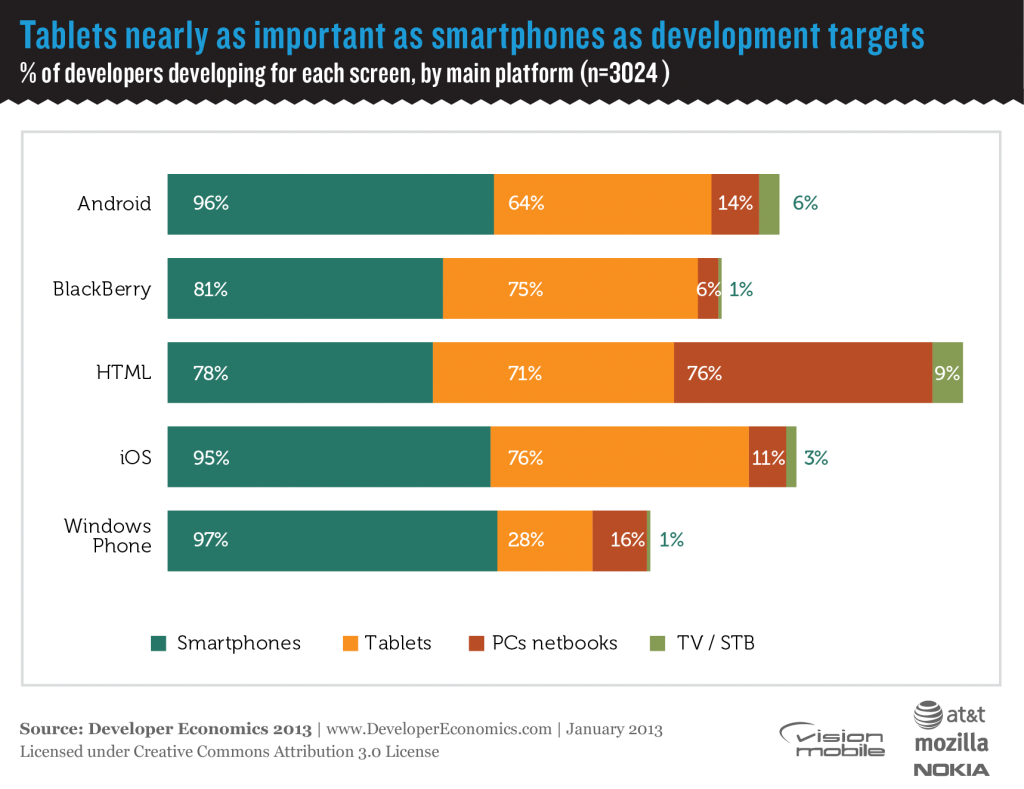 The majority (86%) of 3,460 developers in our survey develop on smartphones, while a large share of them also develop on tablets, led by iOS developers (76%) indicating the attractiveness of the iPad as a development and monetisation platform. Despite the rise in Android tablet share during 2012, we did not observe a significant increase in the share of Android developers targeting tablets (64% vs. 62% in our Q1 2012 survey) although we believe this is likely to change in the near future.

HTML developers take a more platform-agnostic approach, as they develop across smartphones, tablets and PCs almost equally, according to our survey, a testament to the use of HTML as cross-screen app development technology. At the same time, HTML limitations, such as lack of support for native APIs, tooling and device optimizations, prevent it from becoming a swiss-army knife for cross-platform development.

TV development remains niche, at the same levels reported in Developer Economics 2012, as the hype cycle around the “Smart TV” experience is yet at a very early stage. This seems in line with findings from research firm NPD, who reports that only 15% of HD TVs are connected to the internet (directly or via a set-top box), limiting their appeal to app developers. Additionally, only a small fraction of those connected TVs use apps for anything other than streaming video or music services. There is a much faster growing trend for the TV screen to be used via smartphone or tablet apps “throwing” content to it.
[doritos_report location=’DE13 Article – Targeting Screens’]