Consumer apps are the focus for all the excitement and media attention in the industry. Enterprise software is dull and boring, right? Not if you care about making money! Our data shows [tweetable]enterprise developers generate 4 times as much revenue as those targeting consumers[/tweetable]. Besides, what’s so dreary about reinventing the way people work in a mobile and connected world? 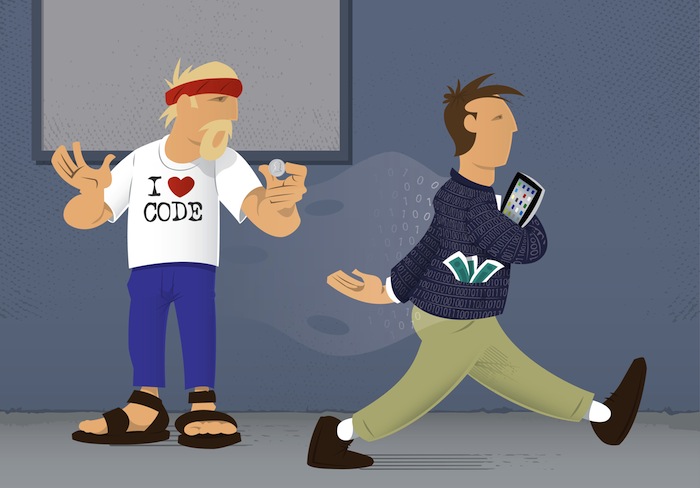 “Wait”, I hear you cry, “what about BYOD and the consumerization of IT? Surely the future is all about selling computing tools directly to professionals?” Well the data from our April-May 2013 Developer Economics survey says that future isn’t here yet. In any case, if you’re going to collaborate with colleagues then you all need to be using the same tools, so most of the time the company still has to choose and buy them.

We asked developers which type of customer they primarily targeted from a selection of Consumers, Professionals, Enterprises, Other and Not Sure. Using this data we can compare the fortunes of developers serving each of those audiences.

It’s entirely natural that a new consumer-focussed computing market for smartphones and tablets spawned a large industry of consumer focussed app development organisations. The market is rapidly maturing now, with smartphone penetration above 50% in all developed markets and tablet adoption not far behind, yet still almost 75% of companies involved in app development are focussed on consumer apps. Traditionally software spending has been much higher in enterprises and although there is a shift towards employees selecting their own technology and tools it is surely not happening as fast as the shift to mobile computing. This leaves a gap in the market for developers focussed on apps for the mobile enterprise to fill.

A little over 12% of the money-making developers in our survey were targeting the enterprise yet they made on average almost 4 times as much revenue (per person involved in development) as those targeting consumers and typically had more than 4 times as many people involved in app development. Developers targeting professional users rather than their companies only made about 50% more revenue per person than consumer focussed developers and had about twice as many people involved in development. So, while this is a promising market, [tweetable]independent app developers are not replacing the enterprise IT department just yet[/tweetable].

At the bottom of the revenue pile it’s no big shock to see that developers who aren’t sure about their target market make by far the least money. How do you build a great product without knowing who it’s for? The small number of respondents who felt their audience didn’t fit one of our categories, selecting “Other”, may possibly be targeting too small a niche since their revenues are not far above half those of developers building consumer apps.

It’s important not to get confused by the similarity of the increased development team size and higher revenue figures – the chart shows revenue per person, so the effect multiplies. That is, the average enterprise focussed app development organisation is making around 16 times as much revenue as the average consumer focussed one in total. That makes the total revenues of the enterprise developers significantly greater than those of the consumer developers, even though there are around 6 times as many of the latter. Averages hide a lot of detail though. You don’t have to build a large company to be extremely profitable in the enterprise mobility market – smaller development teams actually have much higher revenues per developer. More details on that and important differences between consumer and enterprise app developers will be the subject of a future post.

Agree with our figures or disagree? Drop us a comment.