back to blog
April 30, 2013
Prototyping: needless effort or driver of perfection?
byAlexis PiperidesinBusiness

Mobile apps are becoming more and more sophisticated every day. They evolve together with mobile devices, giving us even more pleasant, intriguing and unique experiences. Design, usability, functionality accompanied by various touch interactions, animations, and transitions are integral components of apps.

Building an app is not easy. It involves various stages in a long development life cycle. Apps require time to build, time to test, and time to iterate for improvements. Iterations are not easy especially when extensive code changes are required and that’s where usually things get messy.

There is one solution to avoid the trap that lies ahead when developing apps: prototyping. A prototype is an early sample or model built to test a concept or process, or to act as an object to be replicated or learned from. The prototyping step is often skipped due to the extra cost and effort it adds to the lifecycle of a project. However, it is widely accepted in the development world today, that undermining this vital part of the design and build process may lead to miscommunication between developers and clients, pitfalls, over budgeting, and bad quality products. Prototyping allows developers to conduct proper user trials, iterate before coding and send the app to production only when it is perfected.

In the following section I will briefly describe the prototype tools vendor landscape and the main needs that these tools serve.

If we ignore for a moment the paper prototyping and source code, where no specific tool is used, then we are down to three main types of prototyping tools: presentation software, mobile apps and mobile prototyping applications. 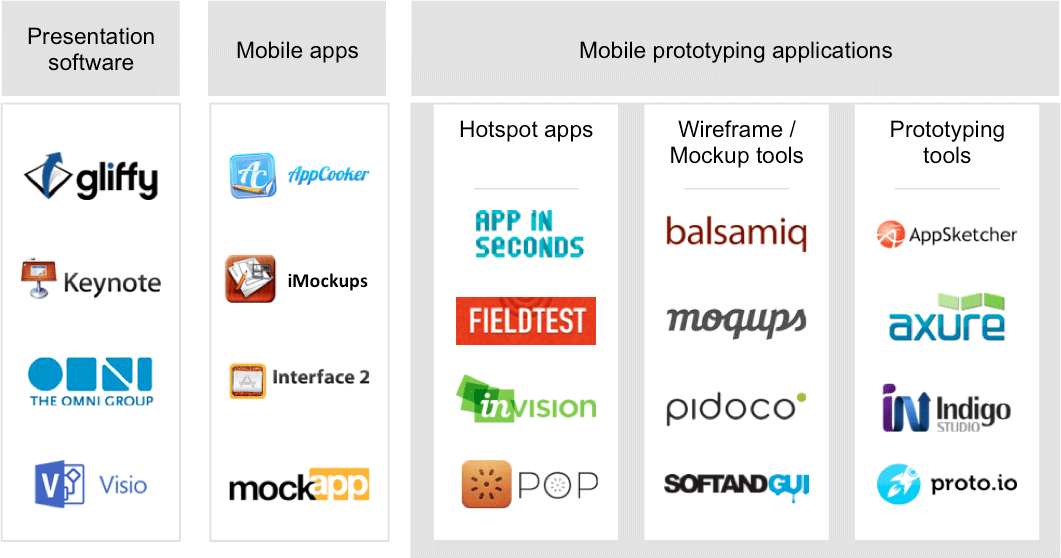 Mobile apps for iPad and Android tablets designed for mobile prototyping allow real device testing which is their main advantage. Some of these apps provide UI libraries of major mobile UI components like App Cooker and Interface HD. Others, like Popapp allow taking photos of sketches and linking them together. Most of these apps are limited to single device prototyping and usually lack sharing and collaboration tools but are very useful when it comes to quickly validating an idea.

Mobile prototyping applications are web or desktop applications designed specifically for mobile prototyping. These applications vary from simple traditional wireframe applications (including mockups) to advanced prototyping tools that are able to provide a varying degree of mobile-specific functionality such as touch events and gestures, interactions, screen transitions. Most importantly these tools provide the ability to preview a prototype on the actual device.

There are three different types of such mobile prototyping applications:

Prototyping tools are still in their infancy. They have been around for two years or less must be in sync with the ever changing mobile industry. New mobile devices become available on a daily basis, new versions of mobile operating systems and new functionality that needs to be supported makes the chase even more difficult. The main challenge is the ability to test the prototypes on the real device. In order to achieve this more tools render their prototypes in HTML5 so that they can run on a native mobile browser without the need of installing and maintaining various mobile apps.

Another major challenge is performance and by using HTML5 features such as animations render much slower on a mobile browser than they would on a native app, making the experience a bit far from real and as such defeating the purpose of doing a full prototype in the first place. Nevertheless, some of these tools have reached a maturity level that allow professionals to create fully functional, interactive mobile app prototypes of their apps that look and behave exactly as their app would. This allows the teams to conduct user trials, gather feedback, and iterate for improvements. Furthermore, a proper prototype narrows the communication gap between designers and developers (coders) as well as with the app team and the stakeholders.

Prototyping tools gain larger audiences as mobile technologies progress. As mobile apps become more sophisticated, more detailed prototyping is required. The mobile market grows and the prototyping tools market will continue to grow with it as more Operating Systems and newer more capable devices are released. New devices come to life every day, from car navigation systems to refrigerator panels, all having in common touch and interactive interfaces.