back to blog
December 07, 2012
App Promotion: make or break your app
byMark WilcoxinBusiness

With well over one million total apps available on Apple and Google app stores combined, plus hundreds of thousands on the other platforms, the competition to get on consumers’ handsets is fierce. As hundreds of apps are added each and every day, app discovery remains a largely unsolved challenge which is only getting worse. With a rapidly changing landscape of app store ranking algorithms, mobile advertising products, cross-promotion networks and specialist marketing services it’s very difficult to decide how to begin app promotion which is cost-effectively. The one very clear piece of advice we can give is what you shouldn’t do – nothing.

In the early days of relatively empty app stores, simply launching a good product was often sufficient to get noticed and soar up the store charts. However, as with any fast-moving consumer goods (FMCG) business, the value within apps has shifted from the contents (the functionality) to the packaging (the user experience) and marketing. No matter what problem an app solves or how effectively it solves it, something as simple as a dull icon can destroy its chances of success. Although expectations around user experience vary from platform to platform, Apple moved the bar for the whole industry and anything short of excellence in this area is unlikely to produce a hit app. Now a truly beautiful and well executed app might get noticed by someone influential and recommended publicly; in such cases social media, effective app promotion or an app store feature*, can lead to the app marketing itself. Sadly, those cases are rare and after spending countless hours perfecting and polishing an app, leaving it to chance whether anyone notices it would be foolish.

Get scientific about the app promotion

Amongst developers who promote their apps, there was a strong bias in our survey towards “free” marketing methods. As the chart below demonstrates, Facebook was the most popular method by far and this was before they introduced a mobile app install ad product – creating both a paid opportunity but also conflict of interest on this channel. The third most popular method was providing a free demo – this solves the issue of helping users to understand a product before buying but does not help with discovery at all; indeed with the huge growth in freemium apps, it’s likely to be harder to get a free demo app noticed than the paid version. 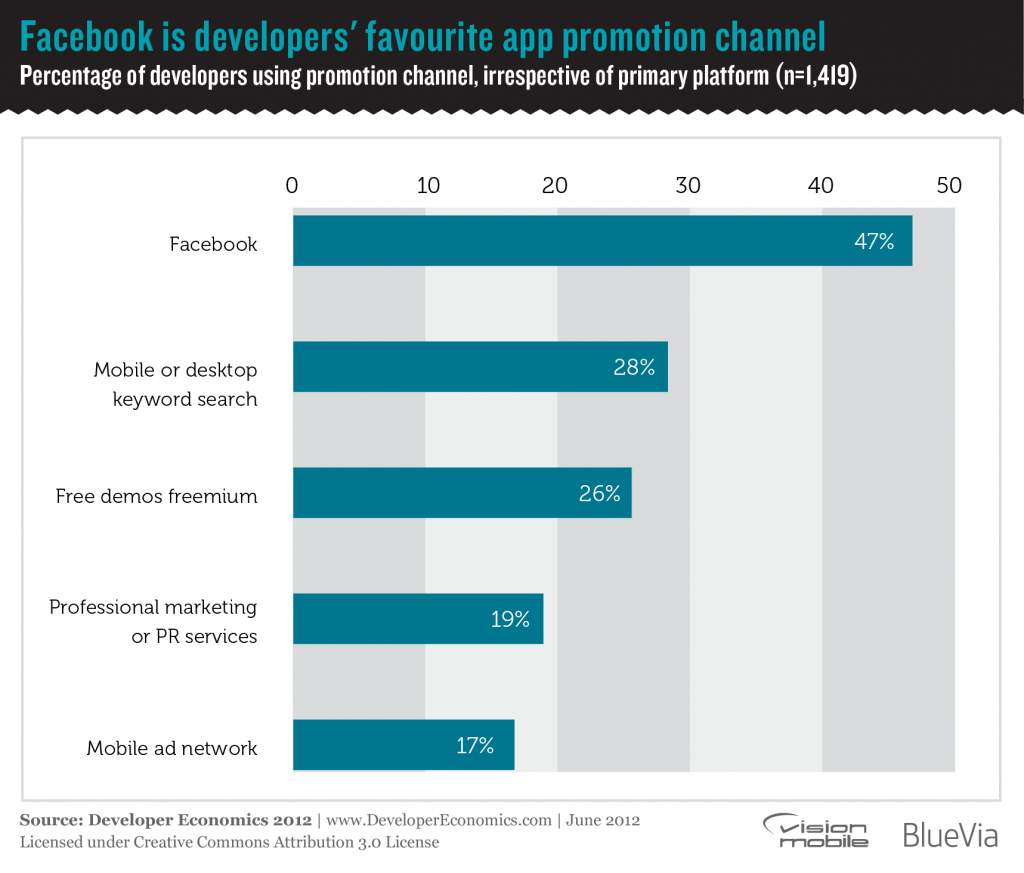 When considering the range of promotional activities available it’s worth factoring in the cost of time carefully. Promoting an app through forums, blogs and social media is time consuming. If you’re not large enough to have dedicated staff for that then it’s likely to displace other product related activities. On the other hand, many paid promotional activities require very little time investment. By assigning time spent on marketing activity a nominal value it’s possible to compare the return on investment between different marketing channels. It makes sense to test the response from different channels before committing significant time or money to them.

Whatever promotions you use, one activity that should not be ignored, whether you work on it yourself or pay for assistance, is App Store Optimization (ASO). This is the app-world-equivalent of Search Engine Optimisation (SEO). Technically, all app promotion should be increasing downloads and hence helping discovery in the app stores. However, app store search is becoming an increasingly important channel for discovery and if potential users find out about your app via anything other than a direct link, it has to be discoverable via search. Changes to the app ranking algorithms can make enormous differences to app revenue overnight, so tracking and optimizing search rank must be an ongoing activity.

Be sure to count the costs

Finally, although app promotion is essential, the cost of acquiring new users has to be significantly below their expected lifetime value. Many of the current paid mobile app promotion and advertising products have a cost-per-click (CPC) model. Those clicks on app store links need to be converted into downloads, then the download needs to be monetized. For a premium app it’s relatively easy to calculate how much you can afford to spend acquiring a user and work out a realistic conversion rate. For freemium or ad-supported apps, you then need to factor in any onboarding losses and account for retention rates – will users stick around long enough to produce a return. The calculations will be different for every app and promotional product but it’s fair to say that none of them are priced well for an app with an average lifetime value per user of $0.99. Developers either need to find ways of delivering and capturing more value, or use more creative and lower cost promotional tactics.

(*) Amongst the apps that have succeeded on iOS with little or no external marketing effort, a surprisingly high number involve ex-Apple engineering staff – this is undoubtedly due to the relative ease of having someone “influential” notice the app as well as the quality of engineering and ingrained focus on UX. Don’t have that level of connections? Better start thinking about other ways to promote your app.