Mobile gaming is a major growth industry. Revenues and profits are soaring and the most successful companies are attracting valuations in the billions of dollars. However the market dynamics are such that very few can succeed and those that do have incentives which are a long way from maximising fun for players. Where are all the revenues coming from? Is the market fundamentally broken? If so, why aren’t the platform owners trying to fix it? 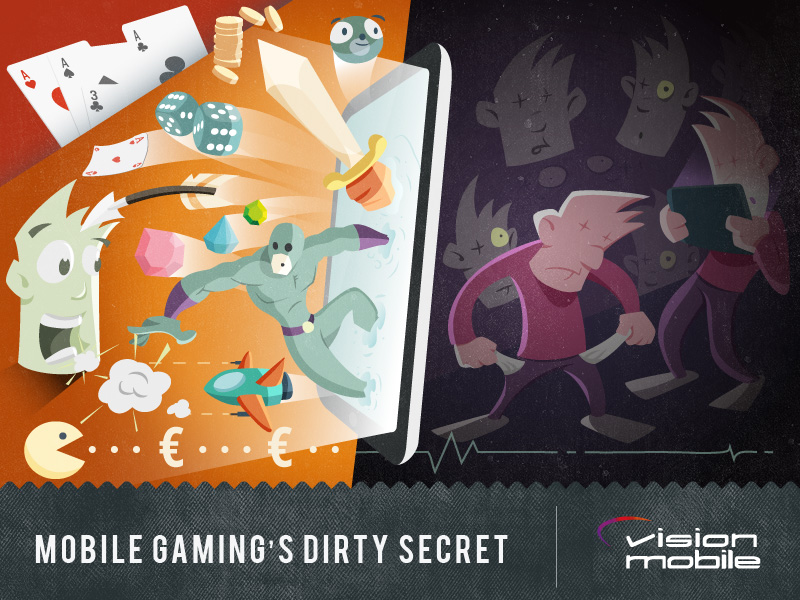 [tweetable]In 2013, games accounted for around 40% of all app downloads across the iOS App Store and Google Play[/tweetable] but approximately 75% of the revenues (according to App Annie). Game revenues more than doubled year over year on the App Store and more than quadrupled on Google Play. By the end of 2013, revenue from games on Google Play was still only about 60% of the iOS App Store equivalent. Since Apple had $10 billion in App Store sales in 2013, we can estimate very roughly that [tweetable]there were around $10 billion of games revenues across the two stores[/tweetable]. This is not far from Gartner’s estimate of $13.2 billion for all mobile games in 2013, projected to rise to $22 billion in 2015.

According to Distimo 90% of all games revenue on the iOS App Store came from free apps with in-app purchases in November. The percentage of revenue attributable to freemium apps in the entire store grew from 77% to 92% across the year. [tweetable]On Google Play 98% of all revenue was generated by freemium apps in November[/tweetable], so the games revenue there clearly favours the freemium model to an even greater extent than on iOS.

Now there are very good arguments that all successful digital content will eventually use some kind of freemium model, here’s a good recent summary. However, there’s a special subset of freemium that’s really generating all the growth and revenue, so called free-to-play games selling virtual goods (e.g. coins, gems, lives). Only a small fraction of users pay at all, only 1.5% according to Swrve, then a fraction of those pay so much more than you could ever get for a paid download or unlocking levels that the average revenue per user (ARPU) is higher than all other models – at least when the game mechanic and purchases are well designed to optimise for this behaviour.

The games with a combination of high ARPU and broad appeal (so they get high conversion rates on user acquisition spending) can afford to bid the most for new users, squeezing others out of the best user acquisition channels. This creates a feedback cycle with the store charts, bringing in even more users organically. Our Developer Economics survey data confirms this: the typical games developer monetising via freemium and in-app purchase business models makes only about twice as much on average as those using the roughly equally popular paid download and advertising models. This difference is nowhere near enough to account for the highly skewed revenue distribution in the app stores. A large fraction of the total revenues are being made by a handful of top publishers.

Who’s Paying, How Much and Why?

Up to this point it sounds like the industry has hit on a fantastic profit formula to be emulated by all. However, if you look at the numbers and their implications then things start to look a little darker. Of the 1.5% of players who pay anything for their “free” games, 10% of those account for more than 50% of the revenue (see Swrve report above). Indeed just 1% of paying players, that’s 0.015% of all players, account for 13% of revenue; contrast with 11% of revenue from the bottom 50% of payers. Even with the astronomical size of mobile user bases, some basic arithmetic suggests the top 1% are spending more than $10k a year each on these games, even the top 10% are spending hundreds of dollars.

The free-to-play games industry likes to call these high spending players “whales” after the high rollers in the casino industry. However, high rollers only account for a small fraction of revenues in the gambling industry and they have a very real chance of winning big too, even if the odds are tipped in the favour of the casino. A better analogy from the gambling industry would be the slot machine addicts who generate a large fraction of the revenues. In fact, these mobile games are designed to be “addictive” it’s just that for some players the addiction becomes very real and they lose all rational control of their spending. So rather than hunting for the high-spending whales, this part of the industry is really exploiting vulnerable digital narcotic addicts.

If you want to see an example of what that looks like in real life, read the New York Times interview with George Yao, a long time top player in Supercell’s Clash of Clans. He spent $3k of his own money on the game in 3 months before wealthy clan mates started to bail him out. At one point he was taking 5 iPads into the shower with him to help maintain his ranking. In his own words about the experience:
“Looking back, I think I must have been insane,” he told me, with a mix of pride and revulsion. “I was so immersed in it at the time. I knew it was abnormal, but never to the extent that I see it now.”

Apple and Google could easily stop this with some sensible limits on monthly IAP spending per app. That could cut off billions in revenue through the stores of which they take a 30% cut. However, the revenue itself is not that significant to either business. More important are the headline revenue and growth figures enabled by this that maintain developer interest in the platforms. As such we’re likely to see external regulatory action before any strong voluntary action on the part of the stores. Apple have already created the Kids section in their store which has extra review criteria to protect children from IAP and targeted advertising but they’re not currently doing anything to stop apps targeting children with purchases that aren’t attempting to list in this new “safe zone”. In most countries, children are not the only consumers protected from questionable business practices. The EU has just announced meetings with the app industry to discuss consumer protection issues – this is likely to repeat elsewhere until the real cost of “free-to-play” games is made more clear to consumers.

If you are interested in Business Models in Mobile Gaming, have a look at the three part series on battle insights by a mobile game CEO.