back to blog
March 12, 2015
How to Make More Money with Enterprise Apps
byMark WilcoxinBusiness

According to our latest developer research, 20% of mobile app developers primarily target enterprise apps. This decision produces a significant boost to their revenues, with 43% making more than $10K per month versus 19% of those who target consumers above the same revenue level. Similarly at the $100K+ per month revenue level we have 18% of developers who target enterprises versus just 7% of those who target consumers. Aside from selling to businesses, government or non-profit organisations rather than consumers, what are these developers doing differently? 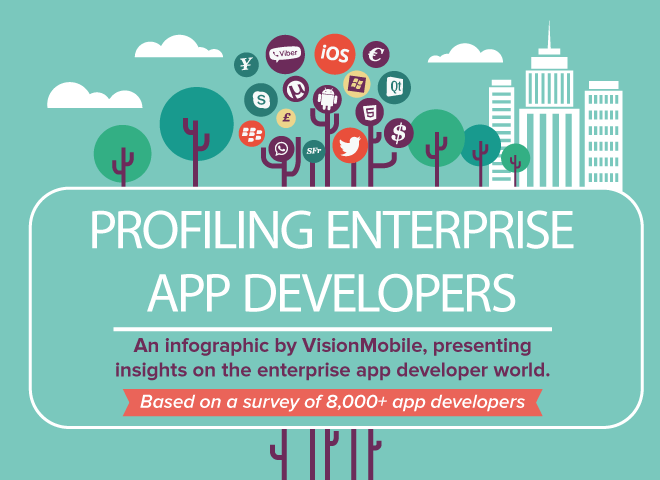 Although it’s far from the only thing developers are building to sell to enterprises, 64% of enterprise app developers are making enterprise-specific apps. In some cases this will be apps that are common to a particular vertical that are either re-skinned or sold as part of a service offering. In other cases these will be entirely custom apps designed and built for one company. Automating or streamlining parts of business processes that naturally happen away from a desktop computer via mobile apps can enable significant efficiency savings that businesses are very willing to pay for. Allowing developers to do more of their work whilst mobile can also improve productivity and company efficiency. This type of development can also cover apps that are explicitly designed to help make more money, for example, sales aids, such as product visualisation or demonstration solutions.

The second most popular category for enterprise developers, at 52%, is business & productivity tools. This is likely to include typical cross-vertical apps for functions such as human resources, customer relationship management and accounting. Also, 20% are making more general utilities and 17% are developing communications and social networking apps for enterprises. In the latter case we see [tweetable]some of the innovation in the consumer apps space being brought to the business world[/tweetable].

Enterprise app developers have a very different mix of revenue models to consumer app developers. By far the most popular revenue model, used by 49% of enterprise developers, is contract work. Part of this is the bespoke app development discussed above but even those selling products into enterprises will often have a significant customization component. In general, the larger the company, the more likely they are to have complex integration needs for a new software product. Subscriptions, in the form of Software-as-a-Service is the fastest growing segment of enterprise software spending and 27% of enterprise app developers are already using this model. Moving software to the cloud, where upgrades and maintenance are continuous and shared with other users, makes a lot of sense for most businesses. Once key software a business uses is in the cloud it’s often highly desirable to have it accessible from mobile devices too, giving SaaS providers with a strong mobile offering a major advantage.

It’s not so surprising that we have to wait for 3rd place in the revenue models list to find app store sales, with 21% of enterprise developers using it. Indeed, although Apple has special volume discount programs for businesses and schools, it’s slightly surprising that the percentage is still so high. For some SaaS offerings, the mobile client or extra utilities to interact with the service are paid extras. This will probably reduce as mobile support becomes the norm rather than a differentiator. App stores for businesses and education are probably still working as discovery mechanisms for some too. This is also likely to reduce, just as the consumer app stores became so full that it’s almost impossible for most apps to get noticed, so will enterprise app stores. Also higher than average in terms of preference for enterprise app developers are selling physical goods and royalties & licensing. Having an app as a component of a larger hardware product is increasingly popular. A tablet can be incorporated into all kinds of kiosk or point of sale systems. Developers can then capture some of the value of the software through higher margins on the hardware. Alternatively, high value software is often sold to enterprises on a per-seat or per-device licensing basis – mobile is no exception. For high value software where sales are typically made directly it’s entirely sensible that this is done as a licensing deal rather than sold through an app store with the store owner taking a cut.

Enterprise app developers are more likely than average to support each of the major platforms. The majority of them support Android and iOS. Most also support at least one other platform too, with the mobile browser and Windows Phone being the top candidates for that. When we look at priorities though, the picture is slightly different. [tweetable]Enterprise developers are slightly more likely to prioritise iOS than average[/tweetable] (with 33% doing so versus 31% for all developers) and slightly less likely to prioritise Android (39% versus 42%). When we consider only full-time professional developers though, these differences are not significant. The major differences are further down the platform mindshare list, with enterprise app developers being significantly more likely to target and prioritise the mobile browser. Also, whilst they are slightly more likely than average to target Windows Phone, they are less likely to prioritise it. Overall the platform picture is one where more platforms must be supported to serve enterprise clients and there’s a heavier emphasis on the web.

In order to support more platforms, enterprise app developers turn to cross-platform tools much more frequently than their consumer app developing peers. 41% of them are using cross-platform tools to reduce the cost and complexity of supporting multiple platforms. However, it’s not just cross-platform tools that are more frequently used to create enterprise apps. Other important tools are push notifications (28%), crash reporting (28%) and mobile Backend-as-a-Service (18%). User analytics, at 46%, is still the most popular tool amongst enterprise app developers, as it is in the developer population as a whole, although used slightly less than average. Heavy use of user analytics and crash reporting tools suggests a greater emphasis on quality. Push notifications are key workflow and efficiency enablers, providing access to timely updates and the latest info available at a glance. Last, but not least, mobile Backend-as-a-Service lets developers rapidly build out cloud services to accompany their apps. The features of these BaaS solutions for enterprise apps are likely to become increasingly differentiated from those designed for consumer apps. Most legacy backend systems were designed before mobile access was even a consideration and they often aren’t very suitable for direct interfacing. We expect to see significant growth over the next 5 years or so for solutions that can simplify the integration of legacy systems whilst enabling rapid development of mobile apps. Where we’ve seen consolidation in the consumer tools sector giving rise to mega-SDKs for solving multiple needs, it’s not surprising that several enterprise focused tools vendors are already covering most of these developer needs in a unified package.