back to blog
February 08, 2013
How to Get App Ideas
byMark WilcoxinBusiness

How do you decide what app to build next? Paul Graham wrote an excellent post about the related problem of finding an idea for a startup. Paul says:

The way to get startup ideas is not to try to think of startup ideas. It’s to look for problems, preferably problems you have yourself.

The very best startup ideas tend to have three things in common: they’re something the founders themselves want, that they themselves can build, and that few others realize are worth doing. Microsoft, Apple, Yahoo, Google, and Facebook all began this way.

However, it should be noted that when Paul Graham says “startup” he does not mean any new company, only the hyper-growth variety that are often funded by venture capital. It should be noted that the vast majority of these companies fail. So, if you’re building a business around apps and are aiming your sights a little lower than “the next big thing” then our survey suggests that solving your own problems might not be the best option. 49% of developers build apps they want to use themselves, but end up generating the least revenue.

The following data should be interpreted carefully, some of the most successful strategies are only viable for larger publishers, or only available for those who already have a successful app – this creates survivorship bias. However, there appears to be a strong correlation between more carefully researched methods of deciding what app to develop and financial success. 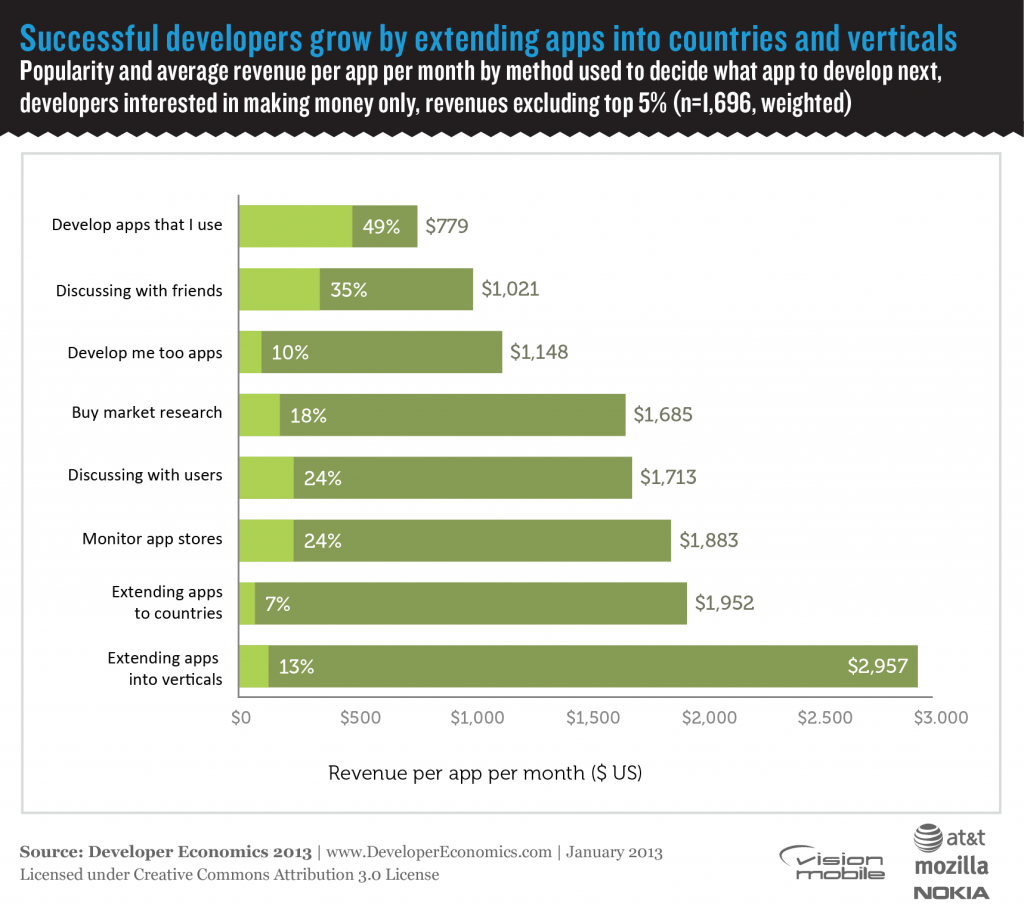 Business side of apps is harder than the technology

Almost half of developers (49%) in our survey decide which apps to develop based on their own needs. Those same developers end up generating the least amount of revenue per app per month, indicating that they have a lot to learn in how they plan their app business. Naturally, planning a business based on own needs may yield a good customer understanding, but lacks the rigor of market research or of extending proven app recipes into new countries or verticals.

User feedback is effective but hard to get

We find it remarkable that only 24% of developers in our sample plan their apps based on discussions with users, a figure which does not change with development experience or proficiency. This indicates that the bottleneck of the build-measure-learn cycle of lean development is the “measuring”, or listening in to user needs. This highlights the need for a frictionless 2-way feedback channel between developers and users, much like what GetSatisfaction pioneered for web apps, and which now HelpShift is pioneering for mobile apps.

To decide which apps to build, a sizeable share of developers uses market research and competitive intelligence. Market research and competitive intelligence are well-established practices in business development and we expect that the increasingly business-savvy developer population will, in the near future, invest more effort in these elements when designing a product strategy.

Developers that publish more apps per year tend to make decisions based on different criteria than those publishing only a few apps per year. For developers publishing 16+ apps, the decision mainly lies with clients or management – these are mostly professional developers that work on commissioned apps or as employees of larger publishers where the decision on which app to work on is mainly based on a defendable business case. Developers publishing more apps also tend to rely on market research more, whether that is purchased research or own research through app store monitoring and analytics services.

The most successful strategies are those that extend an app into markets, either into verticals or different geographies. To some extent these strategies rely on an already established and successful business: these are apps that have been tried and proven in at least one market and are generally less risky options or “low hanging fruit” for developers.
[doritos_report location=’DE13 Article – App Ideas’]