back to blog
June 18, 2013
How better app quality results in more downloads and revenue
byStijn SchuermansinBusiness

While the link between app quality and app success is quite clear to most developers, it’s always good to throw in some actual data. Happy to oblige.

A very nice visualization of the US iOS App Store over  at App Store Rankings shows that a 4.5-star app gets downloaded on average 3.7x more often than a 3.5-star app (265K downloads versus 71K). Our own research has shown that developers that use performance or user analytics tools to improve their apps generate about 3x as much revenue on average. 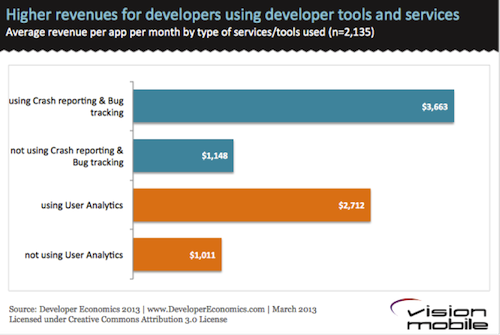 The team over at Appurify have added another piece of the puzzle. They analyzed the top 100 free apps in the App Store as of May 2013 to investigate the impact of common performance issues (e.g., crashing, lagging, and slow load times) on app reviews. Analysis components included: number of total reviews; number of “most critical” reviews; number of “most critical” reviews attributable to performance; keyword counts for frequently-occurring descriptors including “crash,” “fail,” “laggy,”  “battery,” and “slow”.  A clear majority of 1-star reviews featured reports of poor app performance.

The action point for developers is clear. Here are some tools that you might use to improve your app’s quality.