back to blog
April 03, 2014
A guide to building your app business
byMark WilcoxinBusiness

So you want to start a business developing apps? Or maybe you have an app business but want some advice on how to grow or improve it? [tweetable]Simply building an app and publishing it on app store as a paid download is extremely likely to result in disappointment[/tweetable]. This shouldn’t be news to you if you’ve been following the industry in the last few years but what should you do instead? In this article we’ll look at some strategies to increase your chances of building a successful app business. 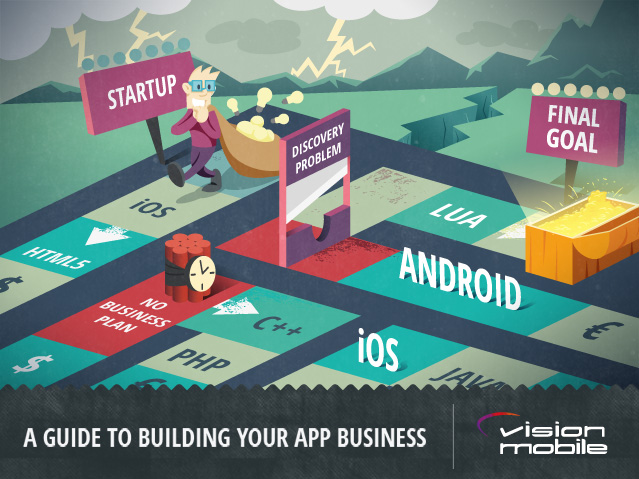 Building a product to sell is exciting and full of creative possibilities but it’s also always a risky approach. If your primary interest is in designing and building apps and solving problems then a far lower risk app business is a software services business. Developers who make most of their revenue from contract development work have the highest median wages by far, in other words, very few of them can’t pay their bills! That said, if you’re planning a software services company it makes sense to use any downtime from client work to build your own products. It can not only generate some additional income but also gives you something you can show potential clients publically (a lot of clients won’t let you publish the fact that you built their app). In our previous surveys, developers who’ve earned a small fraction of their revenue from app stores and the rest from contract work have done significantly better than those doing 100% contract work.

Of course the trade-off with a services business is that the upside is very limited. Global competition makes it hard to charge significantly in excess of typical developer wages. On the other hand, there are several examples of small teams with a hit app that has made them millions of dollars. Our survey data consistently shows that these successes are very much the exceptions. [tweetable]Only a small minority of app development projects are significantly profitable[/tweetable]. Even if you think you’ve got a great idea and a great team then, unless you’re spending your investors money, seriously consider balancing your product development work with some contract development.

If you’re building products, consider your audience carefully. [tweetable]Who you build your apps for has a massive influence on how successful you’re like to be[/tweetable]. In general businesses are much more willing to pay for software than consumers. As I’ve written before, developers targeting enterprises make four times as much as those targeting consumers on average and yet the latter face much greater competition. Don’t think that targeting organisations rather than individuals means you’re limited to automating business processes. There’s lots of complex and interesting software that businesses need, for example visualization tools to help sell product and projects, or even to help construct things in the real world. There are also extremely simple but valuable pieces of software that can make a positive difference in the lives of lots of people; I’ve met one entrepreneur who’s made a small fortune selling eye-testing software. Additionally, you may be able to target your product idea to an enterprise rather than consumers and have significantly greater success. There have been some relatively small scale successes for developers selling educational software on Apple’s App Store but most of the big successes in educational apps are selling to schools instead of or as well as direct to consumers.

If you’re determined to build consumer apps or your category of choice leaves you with little option (e.g. games) then go big or go home. [tweetable]The app stores only consistently reward the best[/tweetable]; an occasional viral hit may do very well for a short while but they’re impossible to create reliably and they rarely last. If you don’t truly believe you can make an app worthy of the top ten in your category of choice then you should probably relegate this particular passion to a side project or hobby. You don’t really need to make the top ten to earn a decent living (although doing so isn’t sufficient, you’ve got to stay somewhere near the top) but it’s best to allow for some overconfidence!

Be creative with business models

Whether you’re building games for consumers or productivity apps for businesses, design your business model along with your app or service. If you design and build the product first then try to bolt a monetization scheme on top, you may find yourself with relatively few options. A large fraction of developers are still using paid downloads or advertising as their primary revenue model despite the fact that these are the least successful options. There are exceptions where other models are not suitable (e.g most kids apps really ought to be paid download only) but [tweetable]much less than 10% of all revenue paid out by app stores comes from paid downloads[/tweetable]. Developers relying entirely on advertising rarely do much better either.

The ideal business model is some kind of subscription or annual license that produces recurring revenue. This is relatively common with services aimed at businesses but certainly won’t fit every consumer app. Most apps that are aimed at consumers need to be free to download.
There’s simply too much competition. Whether you then get paid through in-app purchases or selling some related product or service is still an area open for experimentation. We’re seeing some games developers experiment with physical toys that unlock content. Amazon wants developers to sell their products and earn a commission. There are plenty of unexplored possibilities and new technologies create new ones all the time. You’re not limited to one revenue source either, mix and match! Whatever you do, don’t copy the strategies that aren’t working for most other developers unless you have a very good reason to believe you’ve got a special case. Either copy strategies that are working or try new ones.

First balance your risks according to your finances. Select your audience carefully. Then design the business model to maximise your chances of getting the audience to part with their cash then. Do all three and you’ll have a much greater chance of success than the vast majority of your peers. Now all you need is excellent execution and a bit of luck.