back to blog
December 28, 2012
From Mobile to TV: The companion screens opportunity and the role of apps
byPeggy AlbrightinPlatforms

[This post on Mobile to TV, by Peggy Albright, guest author for VisionMobile, first appeared on the VisionMobile blog on  17 September 2012.] 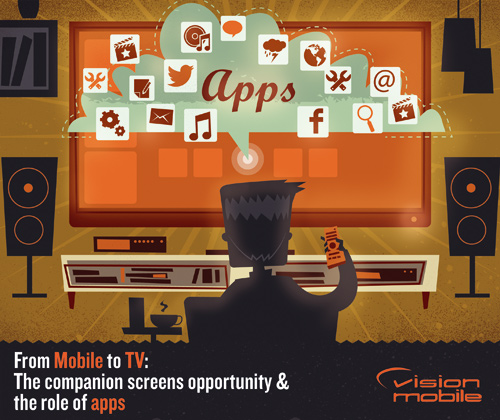 The Future of TV Apps

TV applications are opening up a new business frontier for the mobile industry. But we are still in the most nascent phases of the TV app industry’s formation and it needs to evolve on many fronts. Fortunately, early startup activities are revealing some of the roles that devices, apps, developers, merchandising and advertising can play in this industry, as we’ll see in this article.

The industry is well aware that consumers want to be engaged with their devices while watching TV and that many consumers are beginning to use mobile devices and apps as interactive “companions” to supplement the TV viewing experience. New research released by Google in August provides some of the latest data to characterize this trend. Google found that in a typical day, 77% of television viewers use a second device, such as a tablet, smartphone or PC, while watching TV. More than one-fifth (22%) of these consumers are using the TV and their second device in ways that complement each other, even if it is only a simple search related to the live TV programming.

The roles of companion devices and apps

While it is obviously still very early in the evolution of TV-related apps, the industry is beginning to reveal how it is addressing this emerging market.

Communications tools, which give users a way to engage with others in social networking conversations or activities related to a program while it is airing on the TV screen, are the most common types of companion products and the easiest to implement. For example, yap.TV enables smart phone and tablet users to interact about a TV program via Facebook and Twitter and receive program-specific content feeds. The device and app complement the TV but do not interact with it.

TV programming guides that are more user-friendly and feature-rich compared to traditional TV guides represent another role for companion devices. The i.TV app for smartphones and tablets, for example, has an effective programming guide that allows consumers to use their device to search, organize and bookmark their local TV listings and look up background information on TV shows.

Remote control applications that can make it possible for a companion device to replace the traditional remote are also becoming available. AT&T in the U.S., for example, has iPhone and iPad apps that enable its U-verse TV customers to use their devices as TV remotes. The set-top box provider Arris has developed an iPad application that will allow consumers to interact with the set-top box, including accessing the programming guide, controlling the TV and scheduling recordings. Apple wants its iPhone and iPad devices to offer remote control features as part of its vision for Apple TV and AirPlay, as an adjunct to these products’ regular functions of streaming content from the web and iOS devices to TV screens.

Game console companies are also revealing companion device strategies. Microsoft’s Xbox SmartGlass, for example, enables consumers to connect smartphones, tablets and other devices with Xbox 360 consoles to control what they’re watching on TV, stream media to the TV screen or deliver companion content for videogames, among other functions. And Nintendo’s next-generation Wii U GamePad, a tablet-like controller, can function as a TV remote or second TV screen in addition to displaying video game content.

Mobile to TV: How developers are building companion apps

The role of the TV app and the level of sophistication needed to make it work will depend on its particular use-case. One practical way of looking at this is to characterize the app as serving a lean-back or lean-forward function. Apps that are used in conjunction with a lean-back experience, like movie-watching, complement the viewing experience but don’t distract from it. Apps that are intended to intensify the consumer’s engagement in a live viewing experience, such as a sporting event, will pursue a lean-forward strategy.

Fanhattan, a popular video aggregation, movie and TV-show discovery app for the iPad, serves the lean-back scenario. It enables people to conveniently browse actor bios or synopses of individual episodes of serial dramas while the consumer focuses their attention on the TV screen.

The AXS TV Fights app for iOS devices, developed by Mobovivo, is a lean-forward app designed to engage the customer in real-time in conjunction with live martial arts events that are broadcast over the AXS TV network in the United States. Consumers can use the app to chat with athletes, fans and event hosts, vote on fight results, and view their rankings on the device leader board, among other activities.

Apps can use the TV and companion screens to collaborate in different ways. Interactive apps geared to TV content, such as the AXS TV Fights app, rely on the handheld device for most of the user’s physical interactions so that the TV screen retains its function as the display for the live TV action. Alternatively, apps can use the TV to display leader board rankings or other content while the gaming activity takes place on the device.

The level of app interaction with the TV content can vary widely and will impact the effort needed to build the app. Generic apps that have universal audiences, that are aren’t tied to a specific program or TV provider and that put all the functionality on the device, are easiest to develop and distribute, which can minimize risk.

Apps that are closely integrated with live TV programs and need to orchestrate collaboration between the two screens will require customization and partnerships with TV companies. Developers pursuing these types of apps will need to acknowledge that the TV program or cable operator will want the consumer more engaged with the TV, not distracted from it, and create their apps with this in mind.

Terry Hughes, managing director of AppCarousel, and Alex Gault, vice president of product development and client services of Mobovivo, both believe that the future of these products and services is a complementary one.

Hughes emphasized that collaboration between the two screens will be necessary to create really rich user experiences and in doing so it will make TV more engaging.

“TV won’t become irrelevant to people but another way for them to consume things they’re already addicted to, like gaming and social chatting,” he said.

Gault took the collaborative notion a step further: “As time goes by, applications will be multidimensional. They won’t be just second screen apps, or just TV apps, they’ll work together,” he said.

The merchandising and discovery of Mobile to TV

Application developers already know how difficult merchandising and discovery of their products can be in mobile app stores, and any apps based on TV content will be subject to the same challenges. If the app store is hosted on the TV platform, this situation could be much more challenging.

Ben Hookway, founder of Etherow, Ltd., believes that the shared nature of TV screens will make app merchandising and discovery difficult to implement from the TV screen because apps are inherently very personal products.

“People tend to do personal things on personal technologies, so the preference for consumers will be: I want to find out about apps on my personal device and then have the apps appear on the TV,” he said.

Using search tools to look for apps on the TV will also be a challenge, he believes, citing the market’s resistance to using keyboards for TV remotes and the uncertainty surrounding the market’s willingness to use other emerging techniques, like gestures or voice commands, to perform search functions.

“Nobody knows what the behaviors will be for undertaking complex search where some sophisticated input is required,” notes Hookway.

The advertising flurry around TV apps

Advertising has become essential for building awareness of mobile apps and it will be just as necessary for building audiences for TV apps. The TV environment introduces new opportunities for cross-promotions, which is exciting, but it will also unleash new forms of competition for advertising dollars.

Advertising a TV-related app on the TV during programs that pertain to the app is a logical way to build an audience and can be expected, especially if the network or TV program is partnering with the app developer on the product. And TV networks and brands that offer consumer apps can be expected to use the TV medium to promote goods and services to people who are using their apps.

Hughes suggested that companies advertising products like automobiles—which are too complicated to explain in detail or price in an ad—could use their TV ads to promote the apps consumers use to configure their cars for purchase. Alan Knitowski, chairman and CEO of Phunware, said his company is making it possible for consumers to use their companion apps in real time to purchase products they see on the TV. Knitowski and Hughes, as well, noted that the consumer’s location data and other analytics generated by the companion device are of great interest to TV advertisers and will be used to deliver very personalized ads to customers who use TV-related apps.

Given the magnitude of the TV advertising market, TV apps will become increasingly important as they gain market penetration and sophistication. Andrew Burke, former CEO of IPTV solutions provider Amino Technologies and former CEO of BT Entertainment, said that growth of the TV apps market could create a shift in the traditional TV advertising industry.

He noted that today, TV app developers can often attract advertising revenues traditionally associated with the broadcast programs they address or interact with. If TV advertisers begin to use the second screen app provider for advertising alongside the TV broadcast, Burke said, “We’ll get a redistribution of revenues in broadcast TV.”

Burke noted that the opportunity to monetize additional screens through advertising is the reason that BSkyB invested in the social TV platform provider, Zeebox, earlier this year. The move both illustrates and underscores the importance that advertising on TV apps will have in this emerging industry. Advertising is the main revenue stream for TV and cable companies. In this way, it would be reasonable to expect more deals of this type as the TV audience increases its engagement with companion devices and apps.