back to blog
February 19, 2014
Flappy Bird vs Angry Birds – a tale of Hobbyists and Hunters
byStijn SchuermansinBusiness

Here are the stories of two successful birds on the app store. See if you can spot the difference. 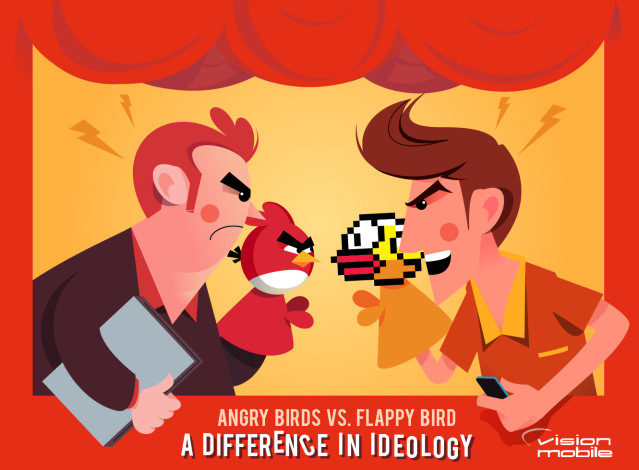 Flappy Bird was a mobile game developed by Dong Nguyen, a Vietnamese indie game developer, in a few evenings after work. He launched the game in May 2013, but only 7 months later (in January) did it unexpectedly gain immense traction. It reached the top of the US charts, and Nguyen was reportedly earning about $50,000 per day from ads. He couldn’t cope with the pressure and abusive comments however, saying it “ruined his simple life”, and removed the game from the app store on February 10th.

Angry Birds was developed by Finnish game maker Rovio Entertainment. It was a runaway success… on the 52nd try! (That’s how many games the good people at Rovio had developed before Angry Birds). Rovio has expanded to be a successful franchise and merchandising business, counting its revenues in the hundreds of millions of Euros. Today, Rovio employs over 700 people according to its website.

Why did Flappy Bird become a flappy Icarus, crashing after flying too close to the sun, and not a new Rovio? In truth, Nguyen and Rovio represent very different groups of developers. Their motivations are not at all alike, and so neither is their behavior.

Dong Nguyen and his indie game studio .Gears sits on the border of a Hobbyist and an Explorer profile in VisionMobile’s developer segmentation model. Hobbyists are motivated by the fun of making an app, and like Nguyen often do it in their spare time after work. They don’t care about success – killing off a successful project that interferes with their sense of fun and peaceful life wouldn’t seem strange to them. Arcade games like Flappy Bird and the other .Gears projects are a typical project for Hobbyists (professional game developers rarely touch the arcade category).

Our Flappy Bird protagonist also shows traits of an Explorer, however. He presents a formal face with the .Gears studio, complete with email address and copyright notice. Put simply, Explorers are “practicing” to become successful app developers (either as contractors or with own apps): their main motivation is learning how to become professionals and they define success by knowledge gained as well as having a lot of fun developing. Some speculate that Nguyen might have tried to artificially boost the app using review bots, which would be more Explorer than Hobbyist behavior. (Nguyen himself denies having done any kind of promotion.)

Whether Hobbyist or Explorer, Nguyen clearly wasn’t in it for the big money. Contrast that with Rovio, a clear Hunter company. Hunters are revenue driven: their goal is to build a successful business and make money from apps. The 50+ games that Rovio built before Angry Birds are a testament to their persistence in achieving that objective. Success is measured strictly in business terms: app revenues (in the case of Rovio enhanced with merchandising) and user reach. Hunters are professionals, out to build real, lasting companies, exactly what Rovio has achieved. The difference couldn’t be clearer.

Understanding the motivations of developers is key to understanding the choices they make. This includes fundamental choices, like the one between lifestyle and business success that Dong Nguyen faced when his project became a huge success overnight. It also includes all the minor and major decisions that app development involves: business models, tools, platform selection, and much more. [tweetable]If you’re working with developers, gaining insights in their motivations is crucial[/tweetable].