Today’s most successful developers are giving their apps away in the app store for free, and, if done correctly, it’s an effective monetization model. At the end of October, of the top 15 grossing apps in the Apple app store, 14 of them are completely free.

This model can be both lucrative (when done correctly) and nerve-wracking, since companies are spending time and resources developing and marketing a product that they subsequently give away for free.

Fortunately for developers thinking about making a game, Apsalar’s Big Data Lab has gathered insights on some 400M unique active devices to help developers make better decisions and figure out what genres of game app developers should be making more of in order to maximize revenue.

For this report, we examined data on millions of in-app purchases. Our goal is to try and inform developers with knowledge on which game categories are most effective at driving in-app purchases and how engagement correlates to purchase events. 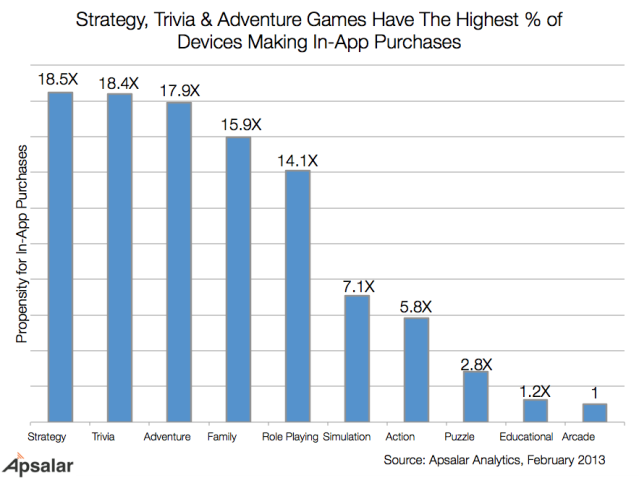 Our data shows Strategy, Trivia, Adventure, Family, and Role Playing games have the highest propensity for in-app purchases. Also noteworthy is the significant drop-off between the top 5 and the bottom 5 categories, as the “Simulation” category has generated about half as many in-app purchases as the “role-playing games” category. One more interesting data point on the above is how low “Action” games rank in terms of in-app purchases. The shift from predominantly casual games on mobile to more hardcore games (i.e., Infinity Blade, Rage of Bahamut, etc.) has driven some companies, who previously pioneered casual games to consider building a hardcore, action game. This data suggests that companies looking to expand beyond casual games should actually consider strategic, role-playing games as viable alternatives.

The next piece of data we looked into was average daily session length by app category. This data shows us how long users have been spending on average per day inside these games. 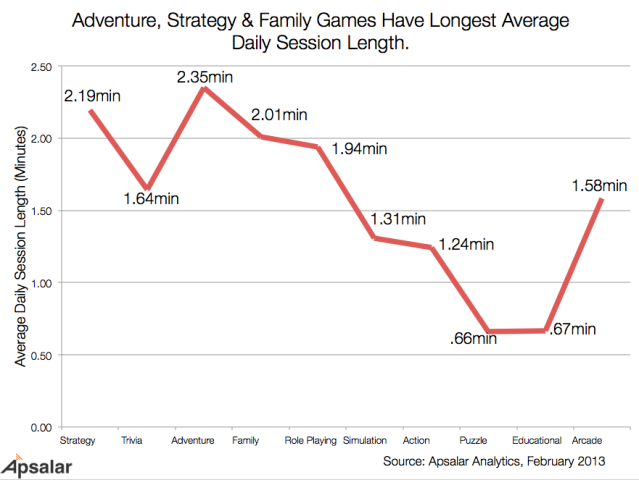 The sweet spot in terms of engagement is around 2 minutes. Interestingly, while arcade games have an extremely high average daily session length (as seen in the previous graph), they generate a relatively low number of in-app purchases.  One possibility may be that these games actually monetize best not by the freemium model, but by a business model known as paymium. In the paymium model, developers have users download free versions of their games then generate revenue by upgrading their users to, for instance, a $.99 or $2.99 paid product.

Strong correlation between IAP and engagement

The graph below presents a consistent picture between engagement and monetization, except for 2 game categories: 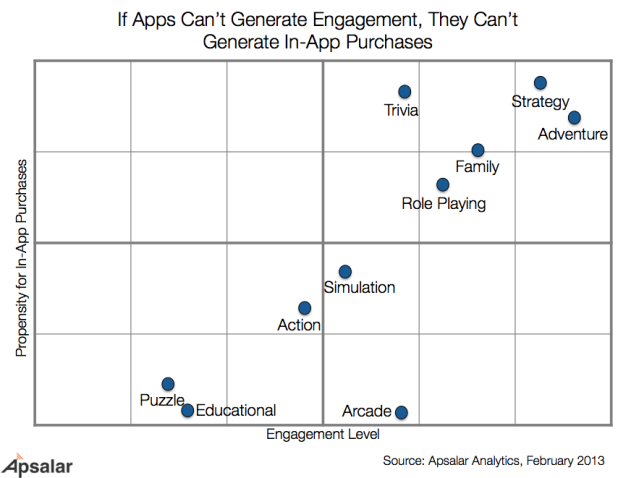 The graph shows almost a straight correlation for all the data points, except for Arcade and Trivia, noted above. Trivia doesn’t appear to be an outlier though. That category generates a healthy level of in-app purchases but is still in a high engagement quadrant. The outlier is Arcade. This category has similar engagement to Trivia, Role-playing and Family (three categories that are high in in-app purchases), yet is at the bottom of in-app purchases.

A key observation is that there is no game category falling in the top left quadrant (i.e. low engagement + high in-app purchases). Which means that game developers have no chance of generating in-app purchases without high engagement.

So the key takeaway for developers using the freemium model is that it’s still critical to first focus on building a great, engaging game in one of the categories where in-app purchases are highest. Once developers have managed to do that and have engaged users, offering in-app purchases such as special items and unique gifts is a great way to take a free app and turn it into meaningful revenue.