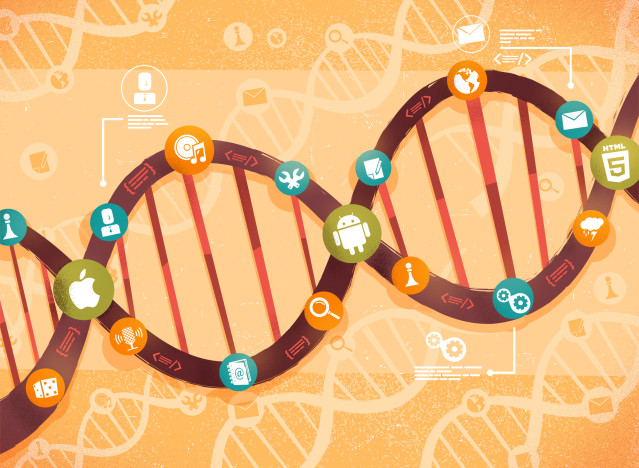 Get your free copy here and read about the movers and shakers in the app economy. Dive deep into our rich dataset and discover how developers select and prioritise platforms, which developer tools they use and how their choices translate to revenues.

As always, we have a lot more data available so get in touch (moredata@visionmobile.com) to get the data you need if you can’t find it in the report.

The latest Developer Economics research shows that 84% of mobile developers are now developing for Android or iOS (or both), the two clear winners in the developer mindshare race. While Android amasses hundreds of millions of new users every year, sales of iDevices are still rising, attracting developers that are more interested in revenues rather than reach. 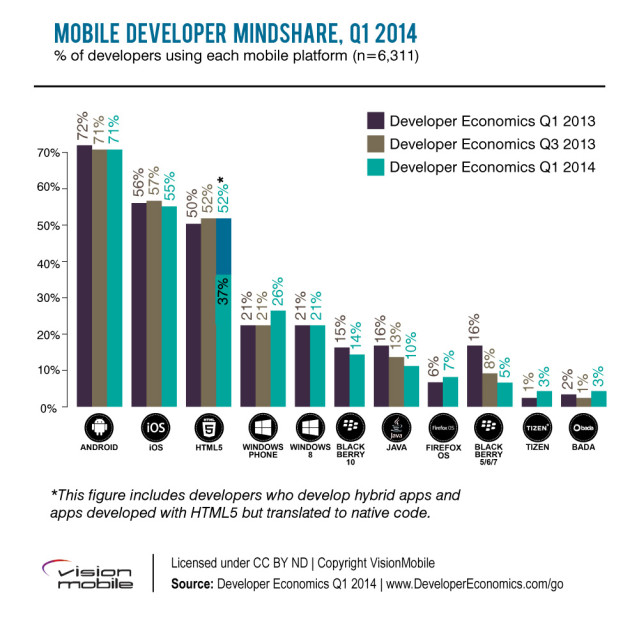 HTML5 continues to play an important role in mobile development, providing diverse development paths for those developers that want to extend their web skills or web assets onto mobile. [tweetable]37% of developers rely on HTML5 for developing mobile websites and web apps[/tweetable], but more developers use HTML5 to target native platforms via hybrid apps or converted or translated HTML5 code.

Microsoft remains the outsider in the ecosystem battle but has gained some ground in the past few months owing to rising sales of Lumia handsets. Windows Phone still faces a long and thorny road in its quest for mobile mindshare. Meanwhile [tweetable]Windows 8 remained stable at 21% Mobile Developer Mindshare[/tweetable] – the Q4 uplift in Surface sales is likely, however, to generate some developer interest that could push Windows 8 ahead.

Getting your priorities right

Developer Mindshare tells just one side of the story. In a multi-platform race, mindshare is nice to have but what matters most is getting developers to prioritise your platform against the others. This means more, better-quality apps and faster updates, keeping users happy. [tweetable]Android is now the priority platform for 37% of developers, with iOS at 32%[/tweetable]. 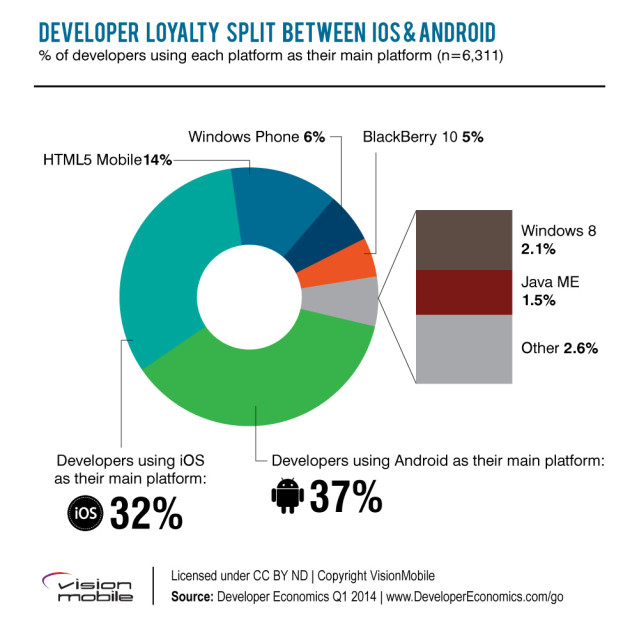 But there are large variations in developers’ priorities: iOS is still the priority platform in North America and Western Europe, with Android claiming pole position in most of the other regions. There are also significant differences across developer segments: [tweetable]Android is very popular among hobbyist developers who may find the start-up costs somewhat lower[/tweetable], but iOS is preferred by Hunters, who target app-store revenue and Guns-for-Hire, who target development contracts.

HTML5 is prioritised by 14% of developers, although a large number of these developers target Android or iOS via hybrid apps, rather than building true cross-platform apps. With 83% of developers prioritising Android, iOS or HTML5, the other platforms face a mighty challenge: if they are to become key players in mobile, they need to convince iOS or Android developers to switch their priorities. But looking at the revenue distribution for developers across platforms, it becomes clear that that is not a compelling proposition for the majority of developers.

We’ve often argued that revenues are not the most important factor for all developers. But at the end of the day, you need to make money, whether that is via app stores, advertising, e-Commerce or any other way you can think of (selling t-shirts to your users or accepting bitcoin donations).

We calculated median revenues to demonstrate the revenue disparity across platforms. The revenues shown in the graph below are the revenues that developers can realistically expect to earn per app per month. 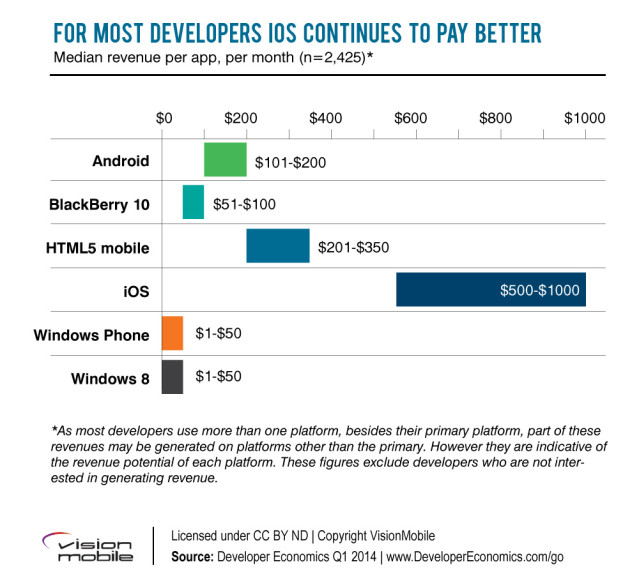 This graph is a picture saying a thousand words and reveals why more than half of the developer population are still investing in a platform that has less than a third of the user reach of Android.

There’s a lot more information on revenues and revenue distribution across platforms in the report, and a lot more graphs and data points that you need to know about if you’re in the app business. We don’t want to spoil the fun so go ahead and download your copy of the report and tell us what you think.

If you don’t find the information you need, then do get in touch at moredata@visionmobile.com to see if we can help.