2014 was quite an eventful year in our industry. Apple finally gave in to the big screen but also teased us with the small screen of the upcoming Apple Watch, and even surprised developers with Swift. Google wasn’t quiet either, revealing their vision for the future of UI with Material design and tackling wearables head-on. To celebrate such a great year, we’ll be taking a look at app store growth in 2014.

In this report we’ll be exploring the growth of each of these stores in 2014, but let’s start by establishing a baseline of how big each of the stores are, in number of apps, and how they got to where they are today. 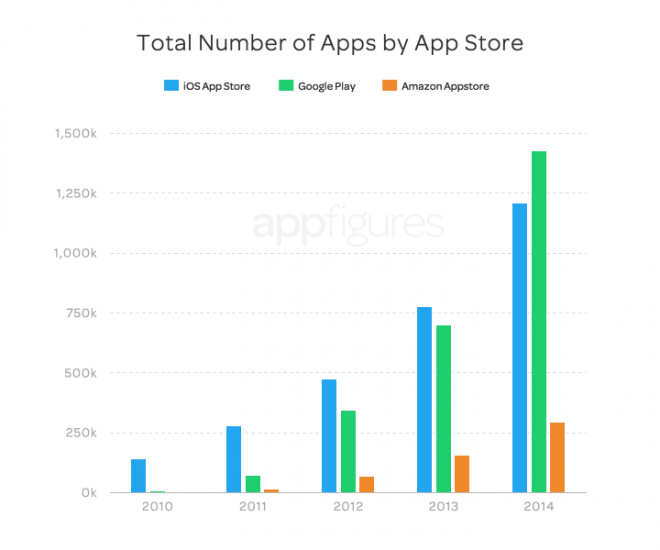 Looking at the chart above we can see all three stores really expanded their app catalog. It’s the kind of healthy growth you’d expect from an industry that’s still relatively new. The most obvious takeaway here, however, is that Google finally closed the gap and actually jumped ahead of Apple, ending the year with more than 1.43 million apps compared to 1.21 million. Amazon, although a distant third, grew its catalog by nearly 90% to 293k apps. 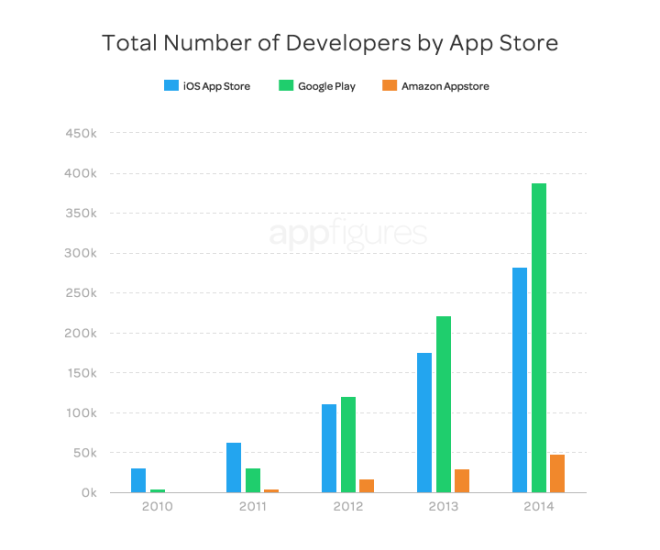 Looking at the number of app developers who publish apps for the different stores, we see a familiar picture. Google Play’s developer community grew tremendously in 2014, exceeding Apple for the 3rd year in a row. In fact, [tweetable]Google Play is distributing apps from nearly 400k different developers[/tweetable]. This is a much higher number than what we observed in last summer’s report on app developers, meaning the Play store saw rapid growth in the last two quarters of the year.

More apps than ever! 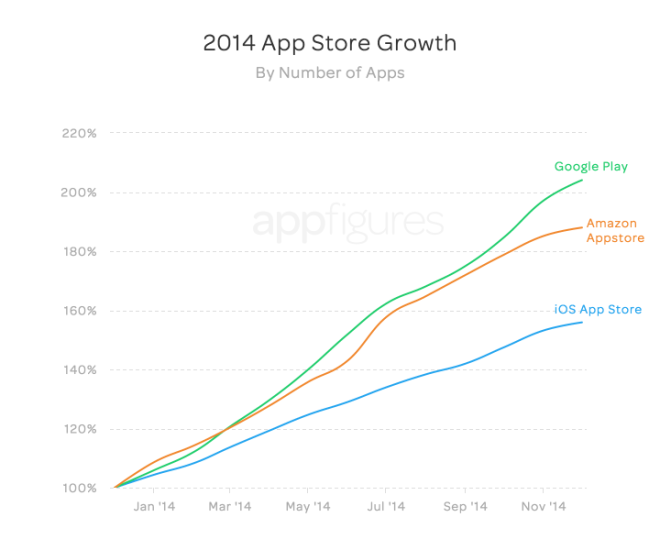 App development is certainly on the rise and the platform doesn’t seem to matter. [tweetable]In 2014, all three app stores grew by at least 50%[/tweetable] (by the way, when we say growth we mean the percent change from the end of the previous year). What’s interesting is that although Apple continues to grow strongly, it’s really Google Play that’s growing. In 2014, the number of apps distributed through Google Play has doubled. Amazon is also enjoying impressive growth, albeit from a much smaller base.

We initially only set out to look at aggregate growth, but with so much data at hand, we just couldn’t stop. So TL;DR Let’s have a look at the top 5 categories with most growth during 2014: 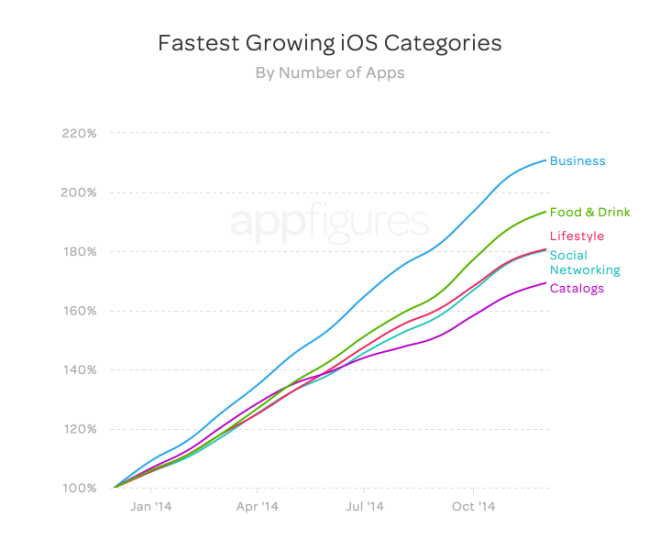 We expected to see Business and Games rank very high as both are fairly mainstream, but Food & Drink, with the second largest growth, was certainly a surprise. Keep in mind, for the comparison to be apples to apples, these charts look at growth and not total size. 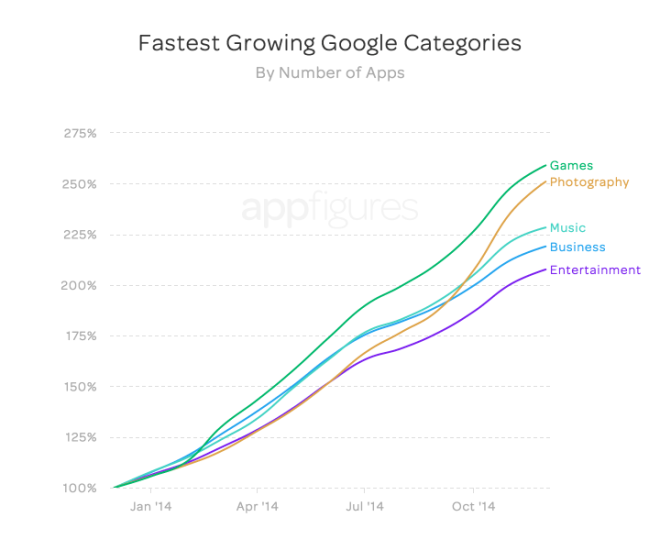 On Google Play, Games are in abundance with the category more than doubling in size. Interestingly enough, although tiny in comparison, the Photography category saw abnormal growth in 2014. Selfie Stick anyone?

This is surely amazing growth, but are those new apps being published by new developers, or is the catalyst for this massive increase in apps a result of incumbents expanding? You’re about to find out. 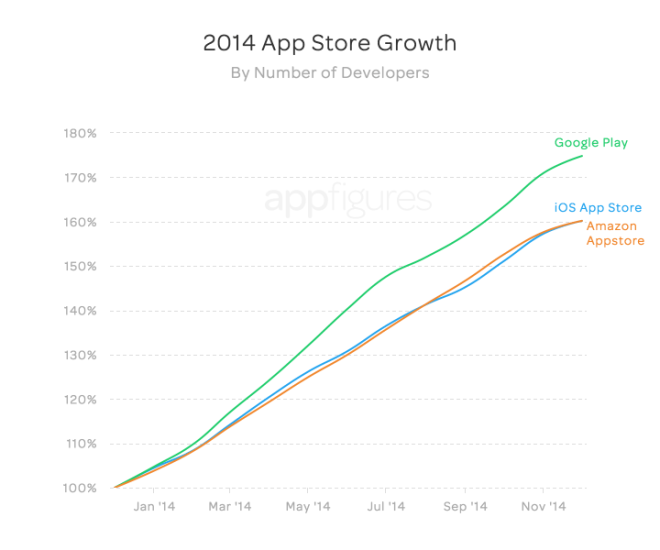 More developers released apps for Google in 2014 than Apple and Amazon combined!

Let’s break this down by categories: 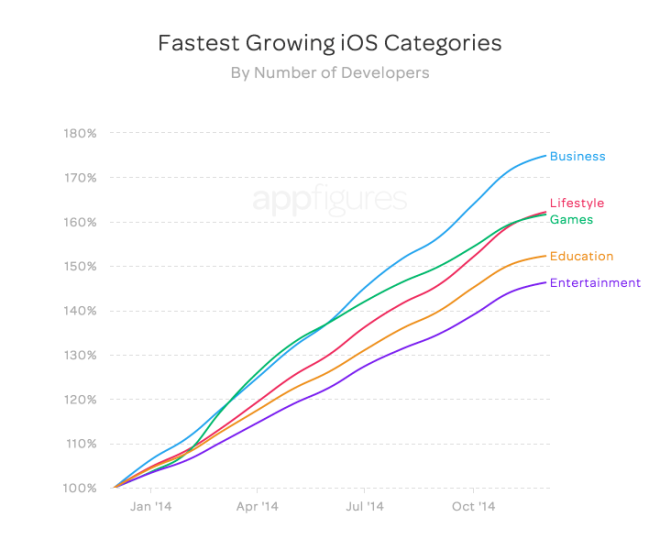 We can see the relationship here between app growth and new developers, with most new Apple developers publishing business apps. What’s interesting is how games started off slow and sped up around March, catching up with the steadily growing lifestyle category. It’s no surprise that Apple developers, much like their Google counterparts, are focusing on mainstream apps. 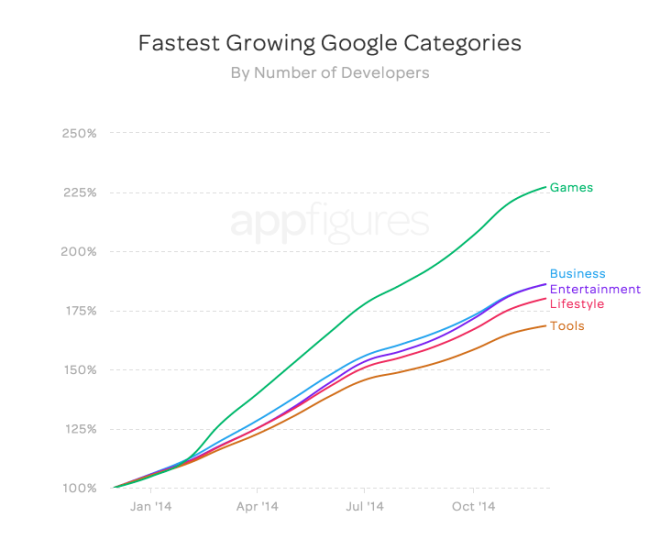 The amazing growth in games we mentioned earlier correlates directly to developers. The category saw the highest number of new developers, more than the business and entertainment categories that are tied for second place.

There you have it, a whole year of amazing growth by the numbers.

[tweetable]2014 was certainly the year for Google Play growth[/tweetable]. Kudos to the teams who run the store and help developers! With the most apps and largest developer community, Google Play is starting the new year with a kick. Market fragmentation and varying device capabilities don’t seem to detract developers from making Android apps. But, with the upcoming Apple Watch, Swift, and a larger screen, Apple is giving developers a lot to be excited about.