back to blog
September 12, 2012
11 revenue models that bring in more cash
byStijn SchuermansinBusiness

Developers have a range of options to choose from when it comes to generating revenue. This choice is, to some extent, dependent on business model, scale and target market. Which revenue models are most popular, and which are most profitable?

There has been substantial innovation on revenue models, which continues unabated. First there were pay-per-download and freemium models, then purchase intermediation for partners and affiliates. The latest innovation is product placement, taking the well-established marketing practice pioneered in Hollywood into the mobile app domain.

The next table lists the 11 mainstream revenue models practiced in mobile apps, alongside their respective revenue sources. 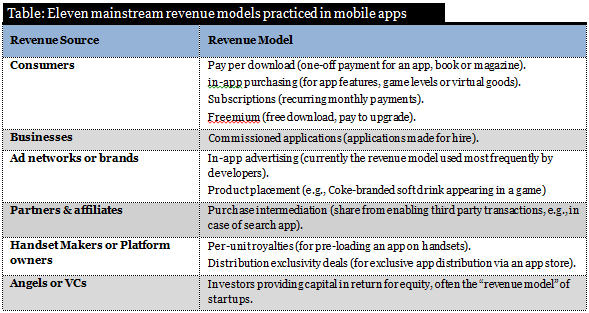 On average, developers use just under two revenue models concurrently.

Popular revenue models are not the most revenue-generating 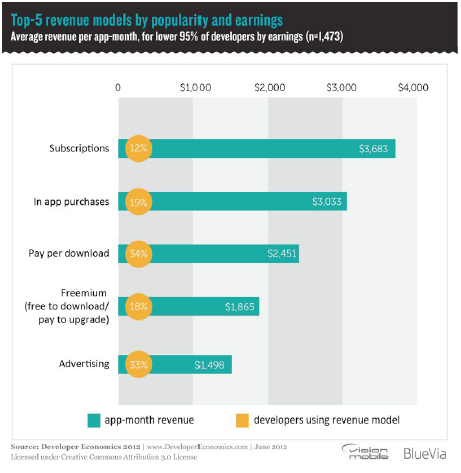 The most successful model in terms of average monthly per-app revenue is royalties from apps pre-loaded onto handsets, according to our survey of 1,500 developers. This model generates, on average, 60% more revenue per app than subscriptions, the second runner-up revenue model. Before developers jump onto this model, though, there’s a big caveat: device preloading is by far the least popular revenue model, used by just 4% of developers. Device preloading is an invitation-only club: handset vendors will cherry-pick the most successful apps to pre-load, while developers will need to spend months of business development to get through the door of one handset maker. Device preloading comes with a very high barrier to entry.

Subscription-based revenue models seem to work quite well, coming ahead of in-app purchasing in terms of per-app revenues. However, they are utilised by just 13% of developers. This reflects how challenging a subscription model can be: building up a paying subscriber base requires a continuous stream of quality content, which is usually associated with higher production or licensing costs.

Following subscriptions, in-app purchasing comes out ahead of other revenue models, generating on average 24% more revenue than pay-per-download, 63% more than freemium and 78% more than advertising. Note that In-app purchasing is the second most popular revenue model for iOS developers (36%). However, it is much more popular on iOS than on other platforms.

It’s worth pointing out that commissioned applications are generally much more lucrative than direct revenue models, i.e., revenues made directly through an app store. Commissioned development is on the rise, driven by thousands of brands going mobile in each country, and system integrators mobilising corporate intranets around the globe. We should not ignore new platform entrants like Microsoft, who are subsidising the development of a Windows Phone app ecosystem, with per-app bills running from $60,000 to $600,000 per application, as reported by the New York Times.

Adjust your revenue model based on category and platform

The next table summarises the popularity of revenue models across the seven major platforms (iOS, Android, Windows Phone, BlackBerry, mobile web, Java ME and Qt). 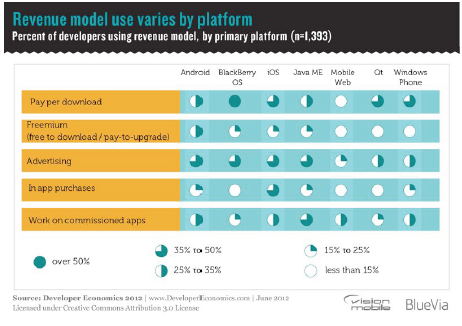 Advertising is the most popular revenue model on Android, presumably because there is more friction for payments on this platform. However, advertising is one of the less powerful revenue generators. This and other factors lead to lower average earnings. Considering the payment friction, your safest bet is commissioned apps or a subscription model.

Both iOS and Blackberry have user bases that will pay for apps. In-app purchases (mainly for iOS) and pay-per-download (for Blackberry) are viable revenue models.

The success and applicability of revenue models also depends on the category your app is in. For example, “free to play” is working extremely well in games right now but it is quite different from the typical “free with in-app purchase” you see in other categories. Also subscription is an excellent model for some categories but simply not feasible in others, either due to usage model or competition.

Finally, the suitability of certain revenue models might also depend on the region in which you sell your app. It’s good to understand the culture you’re trying to sell into.

The viability of revenue models is fast-changing

The analysis of revenue models and revenue potential per platform above is far from static. In fact, the viability of a revenue model can change dramatically in a matter of weeks. It’s important to keep a constant eye out for trends in your sector.

One trend is to move from a pay-per-download model to making the app initially free (freemium or in-app purchase model). This is especially the case for apps where users discover the value over time (e.g. trying out a new game and getting hooked to it), or where the value of using the app actually increases over time (e.g. services like Dropbox and Evernote). A good perspective on this issue can be found here. Another factor is that in-app purchases allow users to spend as much as they want, causing IAP apps to dominate the top grossing charts.