The mobile apps business is maturing and while most of the media attention is still focussed on the latest app store success stories, developers are finding lots of better ways to improve app monetisation. Considering all revenue sources, which categories of application are generating the most money and what’s the competition like on each platform? 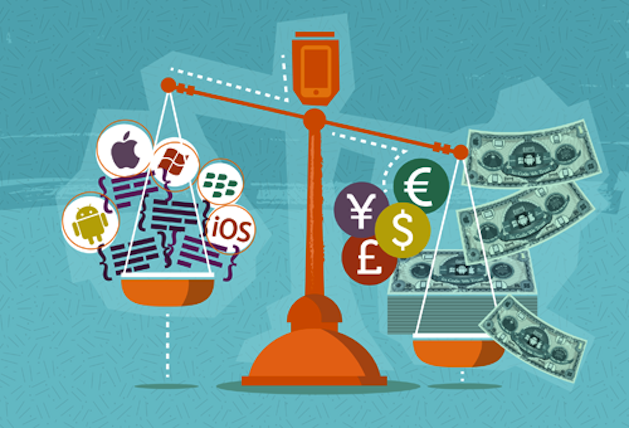 App Stores not the answer?

In our last developer economics survey we asked developers to give us a breakdown of their revenue from different sources. Of the 1,695 developers earning between $1/month and $5 million/month who reported their revenue breakdown to us, 55% generated some of their income from app stores. There is a negative correlation between the fraction of revenue an organisation earns from app stores and the total revenue they earn per person involved in app development. That is, the more you rely on app stores for revenue, the less you are likely to make any. By excluding those with revenues above $5 million/month, we’re ignoring the very top of the store charts where the bulk of app store revenue is made. However, this is just a handful of developers, who would otherwise have an extremely disproportionate effect on the average. It’s also worth noting that [tweetable]there are limited costs involved in app store publishing but it produces the lowest average revenues of all sources[/tweetable] in our survey – it’s clearly not the easiest way to build a profitable app business.

Is there gold anywhere but games?

With games accounting for around 75-80% of all app store revenues it’s possibly not surprising that they were the most popular category of app amongst the developers in our survey. Given the chart above it shouldn’t be surprising that they are far from the most profitable (~$2,500/person/month more than the lowest mean income and the lowest overall median income). So [tweetable]which were the most profitable app categories? Business Productivity and Enterprise apps[/tweetable]. However, there are some significant differences between platforms so it’s worth playing with the interactive chart below to spot any opportunities that might be of interest.

[tweetable]Median developer revenues are higher on iOS than Android across all categories[/tweetable], but in some categories mean revenues are higher on Android. This shows that there are some developers managing to exploit the much larger market on Android successfully but most developers are still financially better off on iOS, including revenues from outside the app stores. Where average revenues across all platforms were higher than either iOS or Android, web developers were usually making the most revenue in that category.

The averages in the charts above still hide a lot of potentially interesting detail on where the best opportunities in the apps market are. Those wanting a more complete analysis should look at our App Economy Forecasts report.