back to blog
October 30, 2013
Is Android First Really a Myth?
byMark WilcoxinPlatforms

Popular perception in the tech press is that iOS gets all the best apps first. With Android market share beginning to dwarf that of iOS globally, there’s lots of speculation around when developers will switch to Android first. Our data shows iOS is still the priority for startups in the U.S. but that doesn’t necessarily apply outside the high-growth consumer app market, or elsewhere around the globe. 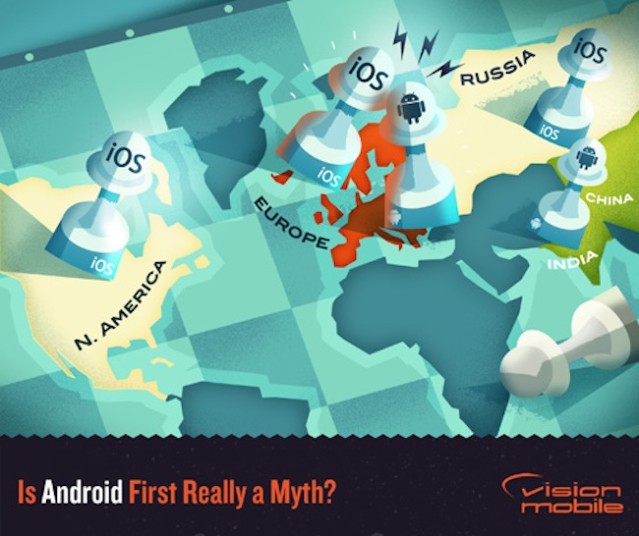 The importance of platform priority

Just over a week ago, Steve Cheney wrote the very widely shared “Why Android First is a Myth”. The post makes some well-reasoned points about an important issue for the future of the smartphone market. One of the things that makes iOS attractive to a significant subset of early adopters is that it gets most apps ahead of other platforms, sometimes exclusively. [tweetable]If most developers start targeting Android ahead of iOS then those users will switch platforms, taking their app and service spending with them[/tweetable]. Where the early adopters go, most of the rest of the market will eventually follow. As such, developer priorities are considered an early indicator of platform fortunes, particularly at the high end. So if, as Steve suggests, iOS is set to dominate Android in this area for many years yet then Apple will keep making the bulk of the profit in the smartphone market. So is he right?

The major problem with the “Why Android First is a Myth” argument is that it is incredibly Silicon-Valley-centric. Whilst the two major smartphone platforms may be developed in Silicon Valley and dominate globally, the content and services used on them does not follow that pattern. Although there are lots of apps in common between U.S. and European app store top charts, there’s still plenty of highly ranked local content in most countries. Looking at the top grossing charts of massive smartphone markets like South Korea, Japan & China, U.S. users would struggle to recognise the name of any publisher (major exceptions being Supercell and King.com from Finland and the U.K. respectively). Not only is the assumption that the apps that make a platform attractive are going to come from the U.S. (or even “the West”) flawed, the assumption that they’ll primarily come from “sophisticated startups” is as well.

Mobile messaging services provide a good example. While VC funded startups may be the way many new services get built in the U.S., WhatsApp being a typical case, the global competition is rather different. KakaoTalk comes from a startup of sorts, although founded by a former CEO of Korea’s internet giant NHN, while LINE came from the Japanese subsidiary of that same Korean internet giant. WeChat comes from Tencent, China’s largest internet company and one of the biggest in the world. It’s more than just how the apps get funded and built though, it’s the types of apps too. The breadth and depth of the app offering on a platform is essential to have all the apps that are important to any individual user, whether it be an app from their bank or niche apps catering to their interests. Otherwise the Windows Phone strategy of paying for the most popular apps to be ported would be a lot more successful. As Paul Graham says, VC funded startups are all about growth, so they have to address issues that they believe are relevant to very large markets. They don’t build more niche or local apps and they don’t build the essential extensions of existing services to mobile devices. This suggests that the platform preferences of a much wider range of developers are important, not just the “sophisticated” startup developers.

With this in mind, VisionMobile has a great source of data for monitoring this important platform priority trend. Our regular Developer Economics surveys ask thousands of developers to rank the platforms they use in priority order. Just looking at the data from the last survey on which platforms are most frequently cited as primary by developers in each country we can see strong geographic patterns.

[tweetable]In almost all countries there are a significant fraction of developers who treat Android as their primary platform[/tweetable] and overall the number of developers with iOS and Android as primary platform is almost exactly even. This is biased by a large number of Hobbyists and Explorers* who overwhelmingly prefer Android, largely because it costs less to get started and the platform is more open. As such, iOS still leads by a decent margin (39% vs 32%) amongst those full time developers trying to build or grow businesses. However, this is not true everywhere with South America being dominated by mobile web developers and most of Asia ruled by Android. Europe is fairly evenly split between the two platforms. Most countries’ developer populations follow local user preferences with a slight bias towards iOS. A major exception is Russia, where iOS penetration is low but developers have an unusually high preference for the platform – this is not just outsourced development either; good technical education, a low cost of living and access to affluent global markets seems to be a great combination for smaller independent developers too.

Finally, if we’re purely talking about startups (or Gold Seekers in our segmentation) then iOS is clearly preferred to Android in North America. Out of those with iOS or Android as their primary platform, 70% are iOS first versus the 30% starting with Android. By the same metric, Asia has a 66% majority of Android first startups and Europe is split 50/50. Although our data set for this particular segment might not be large enough to be comprehensive, it’s clear that “Android First” developers are far from mythical!

If you work in a startup cluster and don’t agree with our numbers then please leave us a comment.

* Explorers are part time mobile app developers with a different day job – for more information on developer segments and their preferences see our segmentation report.