back to blog
April 17, 2013
Advertising is the most popular developer service, AdMob dominates (65%)
byStijn SchuermansinTools

Advertising is the most popular developer service

With advertising being the most widely used revenue model among developers, advertising services attract considerable developer interest taking the top spot among the developer tools that we benchmarked. Providers of ad services monetise their service by taking a direct cut of advertising revenue generated by developers. With 100+ ad networks and exchanges, there is intense competition, regional specialisation and niche solutions. In spite of this, several ad services are not profitable.

The services we benchmarked are either advertising networks that provide direct access to their own pool of ads or ad exchanges (aka mediation engines, not real-time bidding exchanges) that act as aggregators, automating access to a large number of individual ad networks. Ad exchanges offer some flexibility to developers by allowing them to select between multiple ad networks through a single SDK – offering better fill rates and eCPMs. At the same time, ad network SDKs often provide access to more features available, than the generic features available through an ad exchange.

Ad services are most popular with Windows Phone and Android developers

Ad services are most popular with those who develop primarily on Windows Phone and Android (46% of WP developers and 43% of Android developers), and less so on iOS and BlackBerry (35% and 31% respectively). This is in agreement with our findings on revenue models being used on each platform, with developers on Android and Windows Phone relying heavily on advertising to monetize their apps. 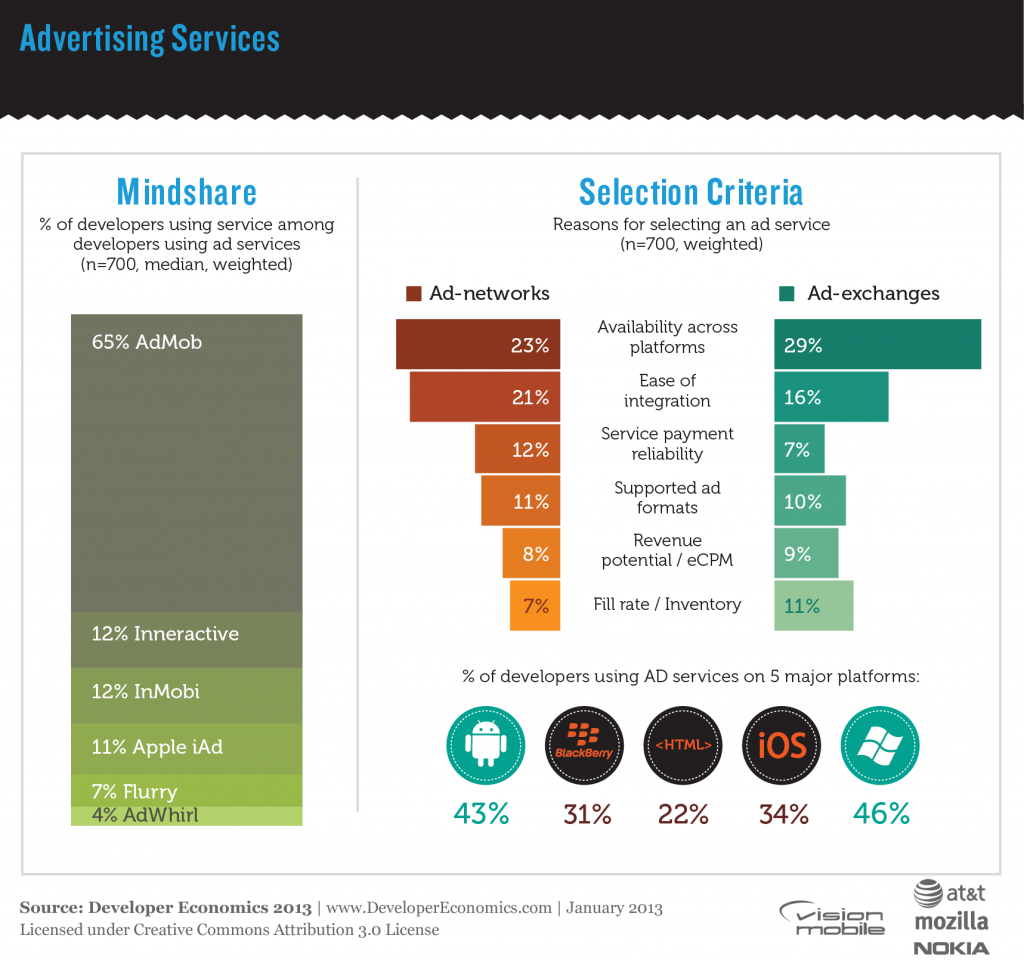 AdMob, a service acquired by Google in 2010 is clearly the dominant platform in mobile ad services, adopted by 65% of developers that use ad services. AdMob has recently expanded to ad exchange services, a move that aims to counter the threat that ad exchanges pose for Google. Second runners, each used by 12% of developers, are Inneractive, an ad-exchange/mediation service and InMobi, an ad network growing out of India to become a major player in emerging markets: InMobi’s mindshare is 17% in Asia and 33% in Africa. Apple’s iAd service comes fourth overall with 11%, and despite being quite popular among iOS developers, AdMob is the leading ad service on iOS, used by 66% of iOS developers that we surveyed.

Ad exchanges are complementary to ad networks. For example, developers will use one service with high eCPM but low fill rate and another with lower eCPM but nearly 100% fill to plug the gaps in the better paying service. When selecting an ad network or exchange, availability across platforms comes on top in both cases. Ease of integration is also very important, particularly so for developers using ad networks. Supported ad formats, revenue potential and fill rate are secondary selection criteria, and therefore differentiation factors across advertising services.