In a recent post on the app localization opportunity we highlighted the potential for targeting growth markets in the emerging world. Not all apps are equally suited to doing so though. For some high-profile apps such as Facebook, Google Maps or Angry Birds the demand is  global and these apps easily penetrate local markets. For other apps — like a taxi booking, cinema schedules or restaurant reservation apps — what works with US consumers will not work in the local business environment or culture in a European or Asian city. Different language, culture, business environment, promotional channels, regulations, brands and local consumer behaviour will mean that many apps will need adaptation to penetrate local markets. It also means that much local app demand is currently undersupplied. China, Brazil and Russia are good examples of major markets that are hard to penetrate, yet present major opportunities for mobile app developers globally. We believe that in the app economy, global demand for top-seller apps will dominate downloads in most regions. At the same time, regional demand for localised apps will drive the production of the next 10 million apps.

To quantify app demand per region, we analysed responses from the 1,500+ developers who participated in Developer Economics 2012. North America tops app demand with 41% of developers indicating this is a top-3 download region, irrespective of their region of origin. Europe claims a 31% share, followed by Asia, where 25% of developers see most of their apps being downloaded, normalised by region of origin. The underlying reasons for this regional pattern of demand have to do with smartphone penetration and app literacy per region, as shown in the graph below. 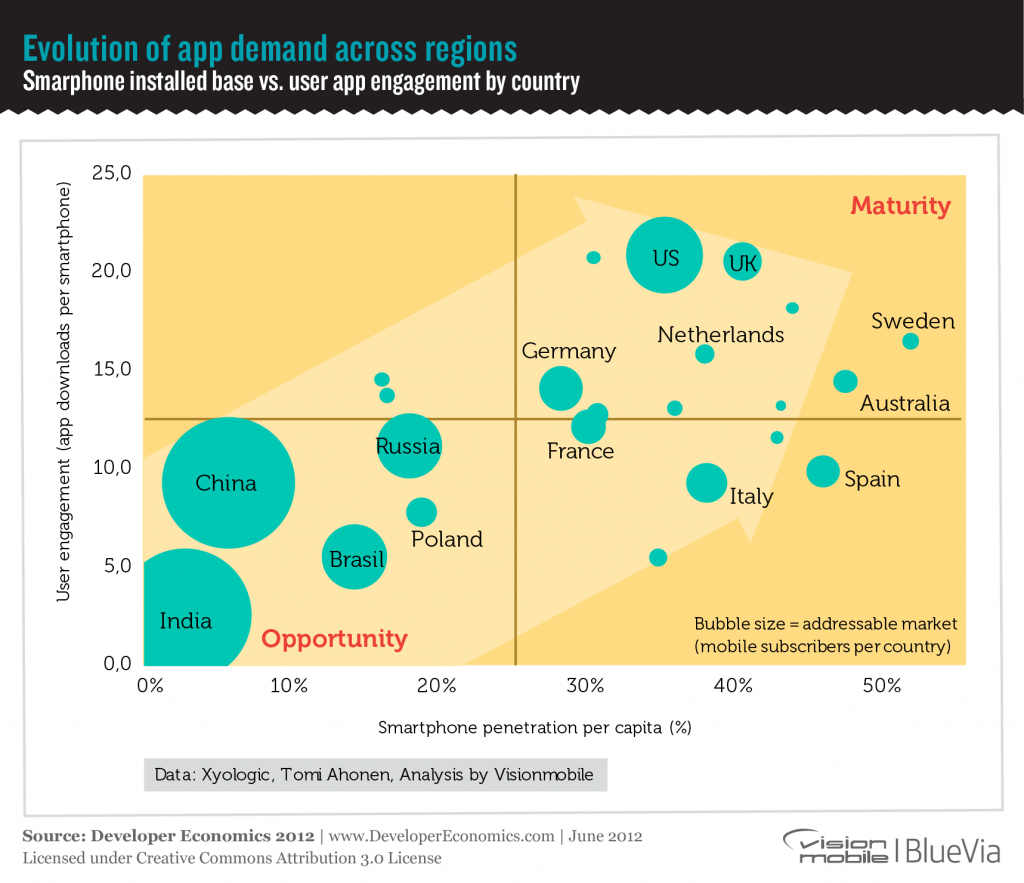 Each country moves forward very rapidly on a trajectory of increasing smartphone penetration. However, as people become more familiar with smartphones and use them to carry out more and more everyday tasks, they also become more app literate. Their engagement levels increase, as they download more apps and use them more often. Cultural and social factors produce a positive feedback loop between smartphone penetration and app literacy. A larger group of smartphone users discuss new apps with more friends, more often, leading to greater app literacy. More discussion of apps among families and peer groups leads to greater smartphone adoption. Therefore, app demand in each country will grow significantly faster than the rate of smartphone adoption.

Presently the leading markets for apps, in terms of downloads per user, are the US and the UK. They are followed by other European markets, such as Germany and the Netherlands, most of which are found in the top-right quadrant. This is the quadrant of maturity, in which markets show the highest levels of user engagement combined with a high smartphone penetration. These are the countries that kick-started the app economy, and have been driving it forward for the past three years. The lower left quadrant, dominated by the BRIC countries, shows lower but rapidly increasing levels of user engagement and smartphone penetration. At the same time, the addressable size of these markets (indicated by bubble size which corresponds to the number of mobile subscribers per country) is much larger than most other countries. As a result, the country-wide app demand in the lower left quadrant of the graph in some cases does exceed that of countries found in the top right corner.

The lower left is the quadrant of opportunity: these countries are at the start of their upwards trajectory in the app-demand curve, and will eventually end-up in the quadrant of maturity. In the app economy, most new opportunities will be found along the path these countries take towards maturity. The opportunity will grow as the product of the three variables shown in the graph: addressable market (circle size), smartphone penetration (x-axis) and user engagement levels (y-axis). The opportunity for developers over the next decade is enormous as smartphones expand beyond the billion-user mark in 2013 and app literacy increases globally.

At the same time, what is clear from the graph is that smartphone penetration on its own is not a good predictor for app demand: countries with similar penetration (e.g., UK and Spain) may have quite a large difference in app demand per user. There are several reasons behind this imbalance.

Demographics: Cultural and income differences make people respond differently to the mobile app phenomenon. People in developed countries will respond more rapidly to new technology and may also have more disposable income and time to buy and engage with apps.

App literacy: There are a substantial number of smartphone users who hardly ever use applications on their smartphones. Android has reduced the entry price-point to “smart” features so rapidly that many consumers buy smartphones just because they are the same price as the feature-phone they want to use to make calls.

Localized content: In order to use more applications and increase app literacy, users must have applications available in languages they understand. For the mature markets, there is a fairly strong correlation between the number of apps downloaded on average in each country and the percentage of the population that speaks English. As such localised content is critical for the BRIC markets where only a very small fraction of the populations can engage with English content.

App Demand: The next 10 million

We believe that the size of the world app economy will be an order of magnitude larger when the BRIC markets enter the maturity quadrant. The next 10 million apps are not going to come from the current leading markets, but from the opportunity quadrant and the demand for localised apps. These emerging markets may not generate the greatest revenues now but it’s worth considering that many of them are leapfrogging traditional IT infrastructure. As such, smartphones and tablets may be the only computers that a majority of the populations own. There is an amazing potential for innovation, disruption and economic growth through mobile technology.